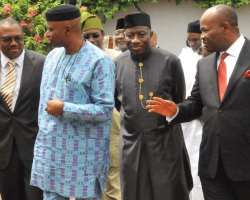 Listen to article
A meeting between President Goodluck Jonathan and governors of the 36 states of the federation held behind closed doors at the presidential villa, Abuja, last night. Journalists were barred from covering it.

The meeting, LEADERSHIP gathered, was said to have been poorly attended as the Rotimi Amaechi faction of the Nigeria Governors' Forum (NGF) shunned it.

As at the time of filing this report, only about 11 of the Jonah Jang faction had showed up while President Jonathan arrived at the venue about 10pm.

State House correspondents had waited for the commencement of the meeting, following announcement that they could as well hang around pending when the meeting will end, only to be told that they were not required near the venue of the meeting.

Earlier, the chairman of the PDP Governors' Forum had led four of his colleagues to the meeting with the president. They came out of the meeting, declining to speak to journalists.