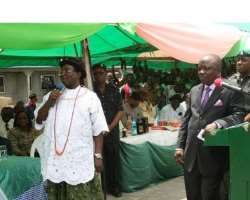 Asaba Feb 22, (THEWILL) - For allegedly awarding a road contract of less than one kilometre at an incredible cost of 114 million Naira, the Delta State House of Assembly Committee on the Delta State Oil Areas Development Commission (DESOPADEC) has descended heavily on the Commission.

A visibly angry Committee Chairman, Mr. Monday Igbuya who led other members of the Committee on inspection tour of projects was shocked when he got to Winners Road, Kwale, Ndokwa West Council and was told of the amount earmarked for the project.

More baffling was the fact that out of the N114 million Naira appropriated, 28 million Naira has been released for the project, which was awarded in 2007.

Unimpressed with the extent of performance, Igbuya directed that the contract be terminated and re-awarded to another contractor for a lesser amount of money. The delay has for a very long time denied the people the so-called dividends of democracy.

At rural Aradhe, Isoko North Council, the legislator expressed its disappointment following the inability of the Commission's officials to explain the real state of two blocks of eight classrooms awarded at N40 million Naira each.

The Commission's Head of Department in charge of Inspection, Mr. Moses Akwenuke had told Igbuya that the classroom blocks were six rooms each instead of four.