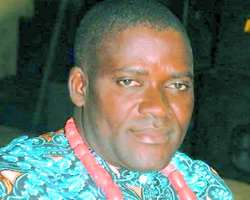 SAN FRANCISCO, June 16, (THEWILL) – A Chieftain of the ruling People Democratic Party (PDP) in Delta State, Comrade Daniel Idonor, has urged the Urhobos to support President Goodluck Jonathan and Vice President Namadi Sambo in 2015 if they will run for second term. Comrade Idonor strongly believes that the President is willing to address the grievances of the Urhobos within the context of Nigeria's federating units.

There has being a widespread agitation by the Urhobo people of Delta state against the Federal Government, accusing it of marginalisation in Federal appointments, despite its demographic size as the fifth largest ethnic group in Nigeria, the second in the Niger Delta and first in Delta State.

In an interactive session with State House Correspondents in the Presidential Villa, Comrade Idonor salutes the courage and doggedness of the Urhobos in supporting President Jonathan's administration; even in the face of provocation resulting from the non representation of Urhobos, the fifth single largest ethnic nationality in Nigeria, in the Federal Executive Council (FEC).

"We the Urhobos in our peaceful nature have continued to support President Jonathan since his days as Vice President, Acting President and now as a substantive elected President of Nigeria. It is instructive to note here that the Urhobos have always taken Dr. Jonathan's presidency as a baby of the Niger Delta/Nigerian Ethnic Minorities struggle which the Urhobos have always been at the forefront right from the colonial days and so when it was time to express it in 2015, they overwhelmingly voted for President Jonathan irrespective of their political leanings and I am sure that my people are still ready to do same in 2015 if he will run. Obviously, this explains the reason why even though no prominent politician travelled to Urhoboland to campaign for the President and Vice President, my people on their conviction mobilized themselves and delivered their votes en-bloc to the Jonathan/Sambo ticket.

Idonor declared that there are some ethnic groups who didn't support the President but currently enjoy representation in the cabinet, stressing that since the constitution requires that every state enjoys representation through a ministerial slot in the government, the Urhobos which constitutes 52 per cent of the population in Delta State deserves a place in the federal cabinet, particularly if one considers the fact that the Governor of Delta State is still not an Urhobo biologically.

Comrade Idonor quipped "As we speak, there is no single Urhoboman or woman serving in any capacity either as a Minister, Special Adviser or a Special Assistant in the Federal Government of Nigeria. In the last ten years that I have being practising as a journalist in the office of the Nigerian President, I have being privileged to interact with over 300 ministers. It is pertinent to note that in every dispensation except this one, there was an Urhoboman either as a cabinet member or presidential aide", he said.

According to Idonor, "inspite of these genuine concerns, the Urhobos have continued to support the Jonathan/Sambo government since its inception".

However, Comrade Idonor assuredly noted "that the President Goodluck Jonathan I know, is not unaware of the genuine concerns of the Urhobo nation and indeed other Nigerian groups and ethnic nationalities in asking for their fair inclusion in the government at the centre, and I am optimistic that in no distance time he will address this".

Asked why he feels the Urhobo people would still support the Jonathan/Sambo ticket in 2015 if the president decides to run, Idonor declared that "I am in touch with various groups and prominent Urhobo sons and daughters both within and without Delta state. I can tell you that my people, the Urhobos, are very resilient people who believed and fought for equality of ethnic nationalities in Nigeria and now that there is some realisation of that struggle as evidenced by the President Jonathan's presidency, my people that I know will be the last to abandon halfway, the course they fought so hard to chart. Despite our worries, the Urhobos are very confident that the President will not disappoint us but will rather attend to our needs".

It would be recalled that President Jonathan had repeatedly assured ethnic nationalities with genuine agitation that his government is committed to addressing injustice and inequalities among Nigeria federating units during his administration.