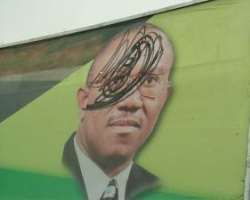 “Please help me put this in one of the Newspaper headlines that the Anambra gubernatorial election result did not reflect the peoples wishes, that there will be Divine revolution in Anambra State if INEC fails to announce Dr. Chris Ngige as winner of February 6, 2010 election.” – stated Rev. Dr. Elias Ike Ekwemmuor, INEC, CSPSERD Accredited Observer No CAC/IT/I7457 in protest over the role the Roman Catholic Church played in facilitating the rigging of the Anambra gubernatorial election in favor of the incumbent governor, Mr. Peter Obi.


The INEC declaration of Governor Peter Obi as the winner of the February 6, 2010 has raised controversy in Anambra over the validity of the said declaration. Some in the political quarters have already pointed to the role played by the Roman Catholic Church as pivotal to the flawed and disenfranchisement of voters. As Ukpakareports.com reliably gathered, the APGA gubernatorial candidate in the said election used bribery of the Roman Catholic Church and its Reverend Fathers to mobilize their church members to the polling booths. Some of the Reverend Fathers were given money by the APGA gubernatorial candidate to pay their church members in return for their votes on Election Day.


Particularly, Reverend Father Paul Dimude of St Anthony's Catholic Enugu Ukwu on the mass of Friday 5th 2010 gave the church youths N1,000 each. The following day being the Election Day, he N500 to the church women and directed both to vote for Governor Peter Obi. On the day of election, he carried food and drinks to all polling stations in Enugu Ukwu. Along with all of the Reverend Fathers in Njikoka LGA, Reverend Father, Paul Dimude sewed the dress of Peter Obi and wore it the whole week of the election. Father Paul Dimude is from Achina, Aguata LGA.


The involvement of the Reverend was not an isolated incident. Available information from aggrieved Reverend Fathers within the church indicates that the practice was widespread throughout the State.


Reverend Father Didacus Ilo of Oko, the Parish Priest of St Mary Catholic Church Achina vowed to his parishioners that if Peter Obi does not win, he will cease to be a priest and told his parishioners and all faithfuls must vote Peter Obi. Reverend Father Francis Obi-Okoye of Abagana, the Parish Priest of St Mathews Catholic Church Amawbia moved from one polling unit to another polling unit telling voters to vote 'okuko'.

And so the controversy found new legs and has begun walking tirelessly. Thus, it led to the Catholic Church in Anambra State becoming divided.


On the face of the unfolding divide comes new information revealing how Governor Peter Obi utilized the voters register in cohorts with the Catholic Church to rig the election. In summative note, Peter Obi used the help of miscreants within the INEC to input 25 special names into the voters register of each polling booth in special areas [numbering 3,000 booths] while scrambling the remainder of the names in the voters register. And as gathered, the 25 persons were select members of the Catholic Church who were then bused to the special polling areas to cast their votes. The result of the input of 25 votes in each of the 3000 polling units was 75,000votes.