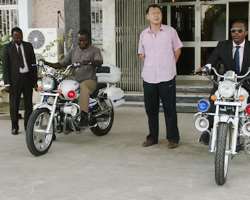 MR. QIU JIAN, DEPUTY CONSUL- GENERAL OF THE PEOPLE'S REPUBLIC OF CHINA PRESENTING TWO BIKES TO THE EFCC IN LAGOS
Listen to article

SAN FRANCISCO, June 13, (THEWILL) – As mark of goodwill intended to further boost the war against corruption and financial crimes in Nigeria, the Embassy of the People's Republic of China, on Wednesday, June 12, 2013 presented two Innoson PY250 Motorcycles to the Economic and Financial Crimes Commission, EFCC.

The bikes were presented by Mr. Qiu Jian, Deputy Consul- General on behalf of the Consul General of the People's Republic of China in Lagos. Jian said his Embassy was impressed by the efforts of the EFCC in tackling graft and expressed hope that the motorcycles will assist the operations of the Commission.

The bikes were received on behalf of Ibrahim Lamorde, Executive Chairman of the EFCC by Illiyasu Kwarbai, Head of EFCC's Zonal Office in Lagos. He expressed appreciation to the Embassy and promised that the EFCC will not relent in its war against corrupt practices.