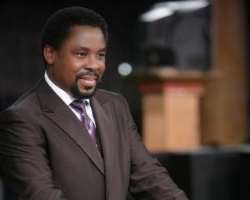 “There must be a Prophet in our midst; God cannot leave us all in the dark concerning things that will happen in the future” these were the words of Prophet TB Joshua during the Sunday live service on 21st February 2010 at The Synagogue, Church Of All Nations.

Coming on the heels of the prophetic statements which were related to the recent coup d'état in Niger and the Joseph Stack crash incident which took place in the Echelon office complex in Austin, Texas, United States, a video clip was shown to the large congregation, detailing the exact words of the prophet and how they related to the prophecy.

These were the exact words of Prophet TB Joshua in the weeks leading to the Niger coup:

17th January: Pray against something against democracy (coup) of one of the African countries. Pray.

31st January: Pray against a coup in one of the African countries. This is one of the French speaking countries.

“America should be security conscious particularly in a gathering of people and should take care of their air space”. Referring to President Obama as "Big Brother", Prophet TB Joshua gave a call to pray for the US President and warned the USA to take more cognizance of internal security 'til March.

True to his words, on Thursday 18th February 2010, Soldiers stormed the Presidential Palace, captured the President and Cabinet Ministers and seized power in a violent coup in the French speaking republic of Niger.

On the same day, a US citizen, Joseph Stack committed suicide by deliberately crashing his plane into an IRS office building in Austin, Texas, USA in a violent protest against the US Government tax and legal systems. In his suicide note, posted on the Internet, Stack ranted against the IRS (Internal Revenue Service) and against The US Government, referring to The US Government as “Big Brother”.

“I choose to not keep looking over my shoulder at "big brother" while he strips my carcass, I choose not to ignore what is going on all around me, I choose not to pretend that business as usual won't continue; I have just had enough…Well, Mr. Big Brother IRS man, let's try something different; take my pound of flesh and sleep well.”

This prophecy has once again confirmed Prophet TB Joshua as a force to reckon with in the ministry of prophecy. The accuracy of these prophecies could be likened to HITTING THE BULL'S EYE.

Prophet TB Joshua concluded saying: “Prophecy and prophets did not die out with the Old Testament”.