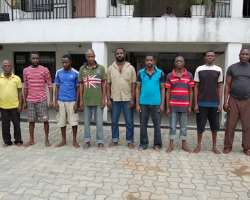 The suspects comprising crew members of MV DALAL were arrested sometimes in March, 2013 for allegedly having onboard products suspected to be illegally refined Automotive Gas oil (AGO).

Preliminary investigation, according to Navy, reveal that the vessel and her crew were operating under the registered name and licence of SOLABSTAR Oil and Gas Limited and that the captain confessed to having lifted 120,000 litters of illegally refined AGO at Akassa to be delivered at Kirikiri Jetty in Lagos.

According to Commodore Enemor, the vessel at the time of arrest did not have Nigerian Ports Authority bunkering permit, ship log, Naval Headquarters approval and JTF OP PULO SHIELD Certificate of Registration.

Laboratory analysis of the sample of the product from the vessel also indicated that the AGO is of poor quality.

Commodore Enemor assured the commission that the Nigerian Navy would provide all necessary assistance to facilitate further investigation and diligent prosecution of the case.