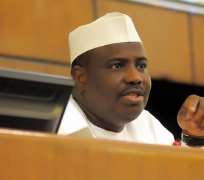 ABUJA, June 06, (THEWILL) - As the countdown to the 2015 general elections begins, the Speaker of the House of Representatives, Hon. Aminu Waziri Tambuwal, has called on Nigerians to insist on a free and fair elections, saying they should vow that votes must count.

The speaker gave the charge, Thursday, in his address at the second year assessment of the 7th House held in Abuja.

Tambuwal, who titled his speech, “Long Walk to Good Governance”, lamented that after 14 years of democratic practice, the country was still suffering from acute democratic poverty, unemployment, insecurity and was lagging behind in several areas of human endeavour.

According to the speaker, “After 14 years of uninterrupted practice of democracy, we still suffer acute poverty of democratic culture and practices. This is a challenge to all Nigerians but more so for those of us deeply concerned in the democratic process and operation.”

He maintained that “The right to opinion and dissent must be given space in our political discourse. Internal party democracy is a sine qua non to the genuine development of democratic culture. Therefore, as we work and walk towards 2015, we ought to take the vow that all votes must count whether in intra party democratic processes or at the level of inter party contests.”

Praising the House for performing creditably , Tambuwal disclosed that “The House has witnessed unprecedented stability in the last two years.,” saying “During these two long years, Honourable members have exhibited uncommon diligence, support, inspiration, selflessness, passion, maturity and willingness to sacrifice towards the promotion and preservation of the national Interest.”

On the legislative achievements, the Speaker said the House has made tremendous progress in the area of consultative representation, particularly the Peoples’ Public Sessions (PPS) held in the 360 constituencies on the review of the 1999 Constitution and the zonal hearings on the Petroleum Industry Bill (PIB).

The Speaker equally applauded the House for the results recorded in different investigative hearings such as fuel subsidy regime, aviation, capital market, non-remittance of revenues by Ministries, Departments and Agencies (MDAs), non-implementation of budget, among others.

On corruption, Tambuwal explained that his leadership has demonstrated zero tolerance for corruption hence, “the House has been decisive in meting out administrative sanctions even when judicial processes are inchoate.”

According to him, “ We have had to apply such sanctions as suspension and removal from committee headships on our colleagues as means of self censorship and internal discipline.”

He directed the House Committee on Ethics and Privileges to expeditiously undertake the comprehensive review of the Code of Conduct to bring it up to international parliamentary best practices.

Specifically, the Speaker noted that in terms of bills and motions, a total of 512) bills have been raised; all of which, he said, have passed first readings. According to him, 60 bills have so far been passed into law, while 134 are undergoing legislative action, having undergone second reading and are at Committee stage.

In his goodwill message at the occasion, the Senate President, David Mark, hailed the courage of the Speaker and commended the entire House for not letting down the electorate in the past two years.

Represented by the Deputy House Leader, Senator Abdul Ningi, the Senate President said he has had a cordial working relationship with the Speaker and acknowledged his brilliance and competence.

Speaking on behalf of the past presiding officers of the House, former Speaker, Hon. Ghali Umar Na’abba, decried the absence of internal democracy in the nation’s polity and advised the lawmakers not to be cowed but remain steadfast in the good job they are doing.