'You Are A Serial Blackmailer,' Lagos ACN Lashes Out At Labaran Maku 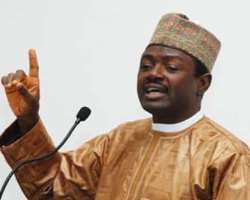 The Lagos State chapter of the Action Congress of Nigeria has described the Minister for Information, Labaran Maku as a disoriented wayfarer and a serial blackmailer who has ridiculed the Information Ministry with his attempt to extort states for a phantom good governance tour when he had done nothing to lift the Ministry of Information above the staid position of purveyors of infantile propaganda.

The party said its position is informed by the sour grape the Minister hauled on the Lagos State government as a result of the state government;s refusal to be part of the revelry Maku is enfooling himself with all over Nigeria in the name of good governance tour. It said that Governor Fashola's refusal to honour Maku's tour of folly remains the reason why Maku made the nonsensical statement that Governor Fashola is doing nothing when every other opinion thinks otherwise.

In a release in Lagos, signed by the Lagos State Publicity Secretary of the ACN, Joe Igbokwe, the party said that it is ridiculous and senile for a so called Information Minister to demonstrate this low level of opinion about a globally lauded government just because Lagos refused to entertain the kind of banality Maku and his ilk have employed to extort states in the name of good governance jamboree. The party said that Lagos State government exists for the people of Lagos who know and appreciate the value of good governance and not pay-for-hire jobbers like Labaran Maku.

'Ordinarily, we would not be drawn to join issues with Maku because he does not know what good governance is and will never recognize one, if he comes in contact with it. We know that Maku is a professional jobber and for a man who said he employed student unionism to live like a king, says of the moral depravity of the character who is no more than a jester and praise singer in a government that has failed in every facet of governance. We know that Maku is merely vending sour grapes because the Lagos State government saw through his folly of organising a programmed revelry in the name of good governance tour when he had done nothing to uplift his ministry in the years he had been the Minister of Information.

'If Maku in his voluntary blindness, saw only progress in the environmental sector in Lagos, can he tell us even one sector his PDP federal government has made a mark in fourteen sordid years of waste laying in Nigeria? Can he show us what he has done in the federal Ministry of Information for the period he has been minister? Can Maku tell us any fruitful achievement, except the ones he conjured in the heat of his extortion drive, the PDP governments he has patronized in his tour of folly done better than the Lagos State government?

'We challenge Maku that rather than sounding so incredible to even himself, he should tell Lagosians and indeed Nigerians those so called structures his government built in Lagos from which Lagos is collecting tolls. We feel it is a pity that someone that occupies such a position as Maku has reduced it to his low level by his infantile desire to take liberty with the truth because his extorting mission is the worst for the Lagos State government's refusal of his tour of folly.

'One would have thought that once the Lagos State Government disallowed his frivolous jamboree of good governance tour, that Maku would have come to Lagos to show us what the government he serves as a chief propagandist has done in the health sector, the education sector, the security sector, the science and technology sector and indeed every other sector in Lagos, especially as they relate to Lagos.

But he did neither of these because there is nothing Maku and his government can show for the trillions of Naira it spends every year. But Maku, blinded by the fury of his unmet demand came to Lagos to expose the ignorance that has made him a misinformation minister who thrives in singing the praises of a bland and incompetent regime that has failed in all scores of governance.

Maku came to Lagos to play the blind PDP politics of denial of the great transformation going on in Lagos, even when his party's governors loudly acclaim these achievements and have come to understudy some aspects of Lagos governance. We wish Maku some luck in this ludicrous mission but we wonder how Maku can recognise what good governance is when the government whose praises he blares has become a huge joke and a piece or ribaldry among Nigerians.

'Lagos ACN wants to tell Maku to concentrate on telling Nigerians what the government he is serving has done with the hefty 52 per cent of monthly allocations it corners and uses to feed indolent, incompetent bootlickers like Labaran Maku. We want Maku to stop fooling himself and extorting state governments on the pretext of conducting governance tours when the government he serves has not made any dent on the many gargantuan problems that continue to assail the nation. Labaran Maku is a poster boy of corruption.

He revealed how he extorted and live like a king during his days as a students leader so we believe his present sour grapes is borne out of the way and manner the Lagos State government shunned the revelry he is mounting all over the states at present. In the blind fury of such unrealized dream, Maku is acting deaf, blind and dumb in deference of the putrid politics with which his party has wrecked a well endowed nation but we want to put him on notice that Lagos is different from the looting paradise they have turned the country and the states under their control to.