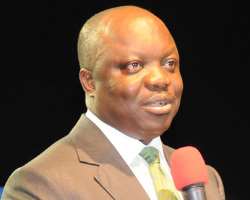 The Delta State Governor, Dr. Emmanuel Uduaghan was among 12 prominent Nigerians who were conferred with the 2013 ADR Special Award for their unrelenting contributions towards promoting effective use of Alternative Dispute Resolution in the Country.

Governor Emmanuel Uduaghan and five other State Governors including that of Lagos, Babatunde Fashola, SAN, Ondo, Dr. Olusegun Mimiko, Niger, Dr. Aliyu Mu’azu and his Sokoto counterpart, Alhaji Magatakarda Wamako who were all represented at the award ceremony were among the 12 recipients of the 2013 ADR Award held at the Congress Hall of the Transcorp Hilton Hotels, Abuja at the weekend.

Others awardees include the Minister of Labour and Productivity, Chief Chukwuemeka Wogu, a former Chief Justice of Nigeria, the Honourable Justice Alfa Belgore, the Olowo of Owo, HRM Olateru Olagbegi III and Chairman of Independent Electoral Commission INEC, Prof. Attahiru Jega amongst others.

The Attorney-General of Delta State and Commissioner for Justice, Mr. Charles Ajuyah, SAN, who received the award on behalf of the Governor, commended organizers of the event for recognizing Governor Uduaghan’s efforts in promoting effective dispute resolution practice in Nigeria. He disclosed that the establishment of the Multi-Door Courthouse model in the State would further boost governmen'st peace building efforts in amicably resolving disputes, pointing out that its peace and Security agenda was fully on course.

While saying that the award would motivate him to do more to safeguard lives and property and consolidate on its achievements, the Governor charged litigants and legal practitioners to embrace the ADR option as alternative means of resolving disputes.

Organizer of the award, Prof. Kelvin Nwosu, ADR Consultant and Chief Executive of Settlement House, Abuja, disclosed that Governor Emmanuel Uduaghan was nominated for the award in recognition of his enviable track records in promoting effective use of ADR adding that Delta State remains one of the few states in the Federation that have established the Multi-door Courthouse model.

Prof. Nwosu said that the event was conceived to use comedy, music, dance and drama as public enlightenment tool to promote ADR and Restoration of Justice in the country.