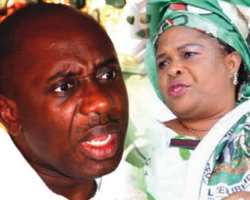 The First Lady, Dame Patience Jonathan, was alleged to have influenced the recent suspension of the Rivers State Governor, Chibuike Rotimi Amaechi, by his party, the Peoples Democratic Party (PDP) through the party’s National Working Committee (NWC).

According to a recent newspaper publication, Mrs. Jonathan handed marching orders to NWC members to place the Governor on suspension. In a swift reaction carried extensively in the media, the Presidency through an official statement refuted this allegation dismissing it as “a most unintelligent and shameless lie.” The First Lady threatened legal action if her name or her Office continued to be linked with the woes of the embattled governor.

Anyone who has been watching the way Governor Amaechi has been carrying on in his party, PDP and in his State will know that it is only a matter of time before he meets his Waterloo. He has not shown respect or loyalty to his party. My argument is based on the following.

As a card carrying member of the Peoples Democratic Party, he has constantly opposed every policy of the head of his party, President Goodluck Jonathan. My understanding of loyalty is that if you disagree with your boss, you call him aside and offer honest suggestions for the way forward. It is both wrong and unbecoming to oppose the head of your party on the pages of the newspaper.


Governor Amaechi has no respect or regard for anybody. He bellyached and openly opposed the fuel subsidy removal and the sovereign wealth fund policy. He also disputed the ownership of the Soku oil fields. In fact if Amaechi were an opposition party member, he could not have been more antagonistic towards Federal Government and his own party. Amaechi turned the Nigeria Government Forum into a trade union. He dribbled it away from its original noble objective. For the first time in the history of the Nigeria Government Forum, there is embarrassing discord among the members of the Forum. This is due to Amaechi’s style of leadership.

He wanted to seek re-election as the Nigeria Government Forum chairman at all costs, not minding the conflict or friction it would cause among the members or within his party. He has already divided the state governors, to the extent that the NGF has become fractured.

In the State he presides over, he demolished the Okrika Local Government waterfront settlement against wise advice. He sacked the Chairman of Okrika LGA and more recently, he sacked the duly elected Chairman of Obio/Akpor Local Government Council, Prince Timothy Nsirim, the Vice-Chairman and all the 17 Councilors of the local government. This is an act for which the PDP NWC suspended him. It was not Mrs. Jonathan who suspended him as she is not a member of the PDP National Working Committee. It was not the President who sacked him either; his sack was because of his “strong head.” The State PDP officials were said to have urged and pleaded with him to reinstate the sacked councilors but all appeals fell on deaf ears.

Amaechi is reported to have absolute disregard for every important indigene of Rivers State, including his former governor and even the First Lady. Mrs. Jonathan. Haba! This is unbecoming of a governor from any political party, not to talk of the PDP.

The States Commissioner Information Semenitari Ibim is following in the footsteps of Amaechi by making unwarranted and disparaging remarks. It is time for the Commissioner to quickly check and reverse herself.

Loyalty and humility are important virtues for any successful politician. Amaechi is said to lack both. Mrs. Jonathan has no hand in the Governor’s recent misfortunes so he should endure his woes quietly without trying to drag anyone’s name into his problems by making unsubstantiated allegations. The situation he finds himself is due to disloyalty to his party and his party has sacked him. Amaechi’s goose is cooked so let him lick his wounds quietly.