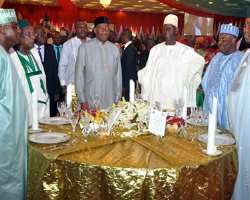 SAN FRANCISCO, May 31, (THEWILL) – The Chairman of the Peoples Democratic Party (PDP)’s Board of Trustees (BoT), Chief Tony Anenih, has made a case for President Goodluck Jonathan to be given an automatic ticket to run for a second term if he so desired.

He also called for the same gesture to be extended to those he described as performing governors and members of the National Assembly who perform creditably while in office.

The party's BOT chairman who spoke Thursday in Abuja at the PDP dinner said: “I do not see anything wrong, if the PDP considers automatic tickets for the President and its Governors who have performed well and are seeking for a second term.

“It is my view that with the outstanding performance of President Jonathan in the areas of Power, Rail and Water Transportation, Road Construction, Aviation Reforms, Education, Agriculture, Job Creation, etc., the party should not find it difficult in granting him the opportunity to serve a second term, if he so desires.”

He said his proposition was made against the backdrop of the incidents of rancour and disunity that have always attended the party primaries.

“Since this gathering is all-embracing and fully representative of our party membership nationwide, I would like to repeat what I said in Asaba about our party primaries.

“I did say that, over the years, our primaries have been the most serious sources of rancour and disunity in our ranks, and, that we usually invest so much resources and energy fighting ourselves in the primaries that should have gone into the larger battle against our political rivals.

“I had admonished that we could not continue this tradition of internal warfare and hope that we would have enough energy left to win elections,” Anenih stated.

He reiterated his earlier call for a new system of selecting flag-bearers at the presidential and governorship levels that would preserve the party’s unity and reserve its energy and resources for the greater battle for political power.

“Soon after my address, I read in the media the positive reception and reactions to my proposition by some of our members who believed that one of the ways to do that should be the granting of automatic tickets to sitting presidents and governors who are seeking their second term.

“I concur with them, provided that the sitting presidents and governors must have performed creditably with tangible results. The same may apply to performing members of the National Assembly although they enjoy indefinite number of terms.

“The proposed arrangement would, I believe, help to forestall frictions and acrimony in the nomination process, in the overall interest of our party and the nation,” he said.

He however condemned what he described as the “persistent negative profiling of the administration of President Jonathan” and urged PDP leaders to rally round and unite behind the president in the task of nation-building.

“The opposition has been relentless in churning out damaging propaganda about this administration for the purpose of destabilising it.

"It is sad that a few members of our party are accomplices of this evil machination. I enjoin all of us to assist in promoting the policies and projects of the Jonathan administration.

“Our historical and political experience demands that we give President Jonathan the maximum cooperation to succeed in transforming this country into a stable and prosperous industrial nation. If we do not cherish and sell our good product, nobody will help us to sell it." He said..

Decrying the widespread indiscipline in all the state chapters of the party, the BoT chaiman said disrespect shown to the office of the president by some top leaders of the party should be condemned.

According to him, “For instance, a situation where Mr. President visits a State for an official function, and some of the PDP Governors of the States in the zone do not attend the function even when invited, is not a good testimony.

" As party leaders, we must learn to show loyalty and respect for constituted authority, that being the only way to promote unity.“I am sure we all realise how important unity is to the development of our great party.

"If we want to continue to enjoy the solid support of Nigerians, we must show to them that we are deserving of their support.

“We cannot afford to continue to act unruly, create unnecessary tension in the Party with the consequence of heating up the polity, and expect Nigerians to applaud us.

“Nigerians can only be encouraged to identify with us, if the promotion of harmony, cohesion and development of the Party and our nation is topmost on our agenda.,” he said.

Anenih called for collective commitment to reposition the party even as he advised that the leadership crisis in the Nigeria Governors’ Forum (NGF) revolving around two governors-Jonah Jang and Rotimi Amaechi-on the party platform should be urgently addressed.

“As party leaders, we must collectively commit ourselves, more than ever, to work selflessly and tirelessly, so as to reposition the Party.

“We must seek to promote unity and enforce discipline. Consider the case of the Nigerian Governors Forum where there are now two Chairmen, both members of the PDP.

“This is an embarrassing situation which must be urgently addressed. The supremacy of the party must be recognized and enforced.

“The leadership of the Party will not tolerate a situation where it will preside over a divided house.

“If we expect the PDP house to stand the test of time, to withstand and overcome the storms and crises being fuelled by the opposition parties, we must be united, focused, decisive and dedicated to a common cause,” he said.

He disclosed that the BoT under his chair was committed to the pursuit of reconciliation in the party.

“In the last few weeks, members of the BoT have visited a number of PDP-controlled States in pursuit of reconciliation. There are four more states to visit.

“During these visits, we had frank discussions with our State Governors and other party leaders.

“In any case, the problems raised are not insurmountable, as the party leadership is already working hard to resolve them.

“At the end of our tour of the States, which will end soon, we will collate the reports of our reconciliation efforts, including appropriate recommendations, and submit to Mr. President, for all the issues identified to be holistically addressed,” Anenih said.