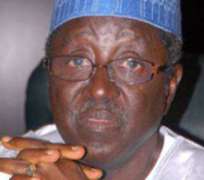 
Nineteen out of the nation's 36 governors were absent when Plateau State Governor, Jonah Jang-led faction of the Nigeria Governors' Forum opened its secretariat in Abuja on Thursday.

The secretariat is located at Nana Close, Maitama.

Signs that things were not going to work well started manifesting when words went round that Vice President Namadi Sambo, who was supposed to be the guest of honour at the event, would not come and did not send any representatives.

The acting Sole Administrator of the faction's secretariat, Mr. Osaro Onaiwu, had told our correspondent on Tuesday that the vice president would inaugurate the secretariat.

Aside Jang, governors that were at the event, were those of Kogi, Taraba, Kaduna, Cross River, Katisina, Abia, Anambra, Delta and Ebonyi.

Others stayed away from the event.
While unveiling the secretariat, Jang said two governors sent their apologies.

He, however, did not mention their names.
Flags of political parties that produced governors were hung outside the premises of the secretariat.

These are Peoples Democratic Party, the Action Congress of Nigeria, the Congress for Progressive Change, the Labour Party and the All Nigeria Peoples Party.

They said the number of those who attended might have confirmed the number of votes Jang scored at the Governors' forum, which was held in Abuja on Friday.

But the Jang faction insisted that since their candidate was endorsed by the majority of the governors before voting, then he should be considered the winner of the election.

Speaking with journalists after a tour of the secretariat in company with other governors, Jang said he was impressed with what he saw.

He also said he would embark on reconciliation, adding that the opening of the secretariat was a new beginning in the Forum.

Jang said, 'I want to thank you very sincerely for honouring our invitation to come for the opening of the secretariat of the NGF today.

'We have not had any formal meeting (today), we went round and saw what they have in the secretariat.

'We want to take this opportunity to congratulate Mr. President on the 14th year if Nigeria's democracy and the presentation of his mid-term report, which he presented at the International Conference Centre on Wednesday.

'We wish him good health, we wish him everything and we support his transformation agenda.'

He disagreed with the notion that the opening of the factional secretariat was not a sign that the Forum was already collapsing.

He said, 'Who said so? When did we just open the secretariat? You know we have been meeting at individual's governor's lodge before and we decided we should be meeting on a new real ground so that we are not under the influence of any governor.

'Every governor would be coming here for meeting and I wish to say that we are working hard to reconcile each other. You heard what I said in Jos and that we will be doing our politics for the nation.

'We are appealing to our colleagues to work together for the glory of the country.'

Also speaking at the occasion, the Governor of Bayelsa State, Mr. Seriake Dickson, said it was wrong to use the NGF for personal ambition.

He said the Forum was also not to be used to promote an agenda or an alternative government.

The governor said, 'It (the opening of the factional office) is a new dawn in NGF; this is what we ought to have done in the first place.

'This Forum is there to serve as a non-partisan body for development and responding for critical issues. That is the new spirit here now.

'We are poised to make a new beginning and to serve a message that this Forum should not be used for personal aggrandisement, this Forum does not exist to be used to as a platform or a tool for antagonising the President and people in authority.

'This Forum is not to be used to promote an agenda or promoting an alternative government.'

Asked about the poor attendance of the event by the governors, Dickson said there was nothing new about it, adding that 'the meeting in Kwara State where Governor Amaechi was elected was attended by seven governors and six deputies. That makes it 13.' (Punch)