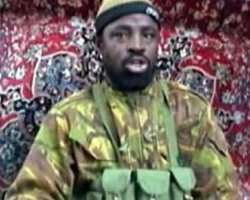 SAN FRANCISCO, May 29, (THEWILL) – Four Lebanese have been arrested by military authorities in Kano over a bust ammunitions depot located in a shopping complex on Gaya road in the Bompai area of the metropolis.

This came as the acclaimed leader of Boko Haram, Abubakar Shekau, in a fresh video message, threatened to unleash more violence with members of the press, the police and the military as major targets.

Though no official confirmation of the Kano incident which occured on Tuesday night was forthcoming when filing this report, the building housing the store where the ammunitions were intercepted had been taken over by stern-looking armed soldiers.

Spokesman for the military Joint Task Force (JTF) and the 3 Brigade of Nigerian Army, Captain Ikedichi Iweha, also refused to comment on the issue when contacted, saying the Brigade would brief Journalists on the issue on Thursday.

“You would get the details tomorrow [Thursday] .Because of the Democracy Day celebration, we have decided to talk to you after the break,” the JTF spokesman told journalists on Wednesday.

Security had been beefed up in Kano metropolis as a result of the Democracy Day celebration with increased patrol vehicles especially in areas considered as flash points such as Kurna Asabe, where two persons were reportedly killed last Friday by unknown gunmen as well as in Hotoro –Mariri , Yankaba and Badawa, which are believed to be the strongholds of suspected gunmen.

Meanwhile, the acclaimed leader of Boko Haram, Abubakar Shekau, in a fresh video message, has threatened to unleash more violence with members of the press, the police and the military as major targets.

Shekau also threatened to target the politicians and members of their families in the new wave of violence, accusing them of corruption.

The Boko Haram leader however denied report that many of his men had been killed in the recent onslaught by soldiers of the Special Forces in Adamawa, Borno and Yobe States.

“There is no truth in that claim, it is only a propaganda, in all we have only lost seven members while the Soldiers cannot count the number of their men who were killed in the confrontation,” he said in the one-hour video message.

While threatening to deal with informants who expose the Boko Haram members and their activities to security agents, Shekau also accused the media of dishing out falsehood against the sect, especially on casualty figure its members.