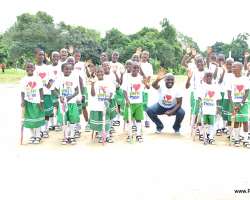 27 Kids from Government Primary School, Ikang in Bakassi Local Government Area of Cross River State celebrated this year's Children's Day for the first time, outside their local council when Uncle Speed took them a on free Education Tour to Tinapa Resort in Calabar, and couldn't stop liking it.

The Kids travelled alongside Uncle Speed, their Head Teacher Mr. Evogor Emeng and three other Staff from Ikang; had Fun-Stop-Overs at the Roundabouts in front of University of Calabar and that at the Entrance of Calabar before heading towards Africa's Premier Business and Leisure Resort.

At Tinapa, a Tour Guide lead the kids to sight-see the Shopping Malls. Where they saw a bouquet of product offers and spent time window-shopping and absorbing the vast array of displays of world class brands on display. The Tour Guide told the Kids, the prices of goods sold within Tinapa are the lowest in Nigeria.

The Kids were also told about the Tinapa Technology City, and they took photos at the Entrance of the City in hopes someday, they would be around to learn a few things when its opened June this year, as the Guide said.

The Games Arcade, the Tour Guide said, “is the ideal place of pure and undiluted fun.” And the Kids confirmed that. It was like a Paradise of Games. But the kids must not stay forever in this 'Paradise' the Fisherman's Wharf (which overlooks the Artificial Lake in Tinapa) waited to be sight-seen.

After leaving the Wharf, the Kids walked past the impressive Tinapa Lakeside Hotel straight and anxiously into the water park. At Tinapa Waterparks accepted the invitation to experience unequaled family fun. They dived into a Lazy River, rode in a Sky dive, enjoyed the game of volleyball (even though they couldn't play), and mingled with lots of other kids and families.


Before they returned to Ikang, Uncle Speed delivered lots of gifts to the Kids. The gifts had been donated by bighearted Nigerians like Julius Agwu, Kevin Chuwang Pam, Senator the Comedian, and 24 other donors whom the Children refer to as Angels. The gifts they go include Exercise Books, Math Sets, Uniforms, Sandals, Water Bottles, Umbrellas, Wrist Watches, etc.