Nyako Heads To Court Over Use Of State Funds For Emergency 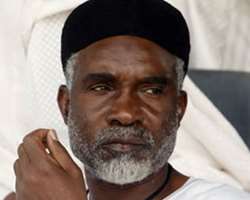 SAN FRANCISCO, May 28, (THEWILL) – The Adamawa State Governor, Admiral Murtala Nyako, is heading to court to stop the Federal Government from tampering with the statutory allocation of the state and local governments following the declaration of emergency rule in the state.

The Governor said it was unconstitutional for the President to hold and administer funds meant for the state as well as two others currently under emergency rule.

In a statement by Mallam Ahmad Sajo, the Director of Press and Public Affairs, to Nyako, the Governor said the affected states would seek judicial redress on the matter.

“Definitely the affected governors of other states and Adamawa will go to the Supreme Court should the president make the move” insisting that the President has no powers to render a state cashless.