…Boko Haram planned to hijack commercial aircraft, crash it into Aso Rock, others
ADDIS ABABA, ETHIOPIA-President Goodluck Jonathan has said the State of Emergency declared in Adamawa, Borno and Yobe states may not last six months as prescribed by the constitution in view of the successes recorded even as it has been gathered that before the deployment of troops, Boko Haram sect had planned to hijack a commercial plane and crash it into the Presidential Villa or other national monuments.

President Jonathan who met with the Secretary General of the United Nations, Mr Ban Ki Moon on the sideline of the Africa Union conference in Addis Ababa, Ethiopia, said the military operation in the troubled states was going very well and the military has strictly adhered to the rules of engagement.

He explained that the successes recorded by the military was exemplified by the lack of collateral civilian casualties, noting that the operation has helped in creating a better relationship between the civilian population and members of the armed forces.

The president told the Secretary General of the United Nations that the government would do everything possible to ensure that the civilian population was not put through hardship, adding that the governments's decision to release women and children members of the Boko Haram was in the spirit of the rules of engagement of the operation. 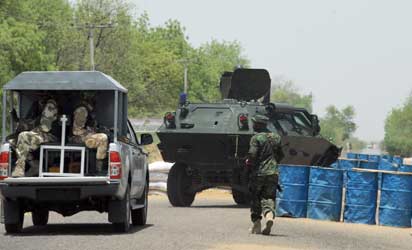 Ban Ki Moon cautions Nigerian military
The Secretary General of the United Nations, Mr Ban Ki Moon, sympathized with the government and people of Nigeria over activities of Boko Haram, saying that terrorism was a global phenomenon that must be confronted by the international community.

He reiterated his call on the Nigerian military engaged in operations in the affected states where state of emergency has been declared to be prudent and cautious in protecting the civilian population in the areas of operation.

Meanwhile, as the military onslaught against Boko Haram terrorists continues, Vanguard has gathered that before May 14 when President Goodluck Jonathan declared a State of emergency, credible intelligence revealed plans by the sect to hijack commercial aircraft fully loaded with passengers and use it to attack one of three national monuments.

Boko Haram plans to attack national monuments
These are Aso Rock, the seat of the Federal Government, the Central Bank Headquarters, CBN, Glass house and the Four Towers headquarters of the Nigerian National Petroleum Corporation, NNPC.

It was gathered that the terrorists would have carried out the attack on Aso Rock and NNPC Towers similar to the September 11 attack on the Twin Towers in the United States with all the passengers on board and send a message that they have taken over affairs of running Nigeria.

Aside the planned attack, Vanguard was told by very competent security sources that the acquisition of Anti-Aircraft Gun and Long Range Surface to air technical guns by the sect, was meant to shoot down aircraft that flew over the North Eastern parts of the country, especially as the terrorists had hoisted their flags in Yobe and Borno states.

According to the sources, 'Consequent upon our discovery of their plot, security agencies warned the Nigerian Civil Aviation Authority, NCAA, and other aviation agencies to stop local and international aircraft from over flying the North East airspace to avoid collateral damage.

'This warning was heeded and for about three weeks before the State of Emergence was declared, commercial aircraft, both local and international were diverted from over flying the North East areas except military aircraft'.

It was to unearthing the ammunition and heavy weapons capability of the Boko Haram sect that troops of the multi-national Joint Task Force on reconnaissance mission to the Mosque in Baga, where some of the anti-aircraft guns were to be mounted, were attacked and when reinforcement came, they fired the weapons at the soldiers.

'As I am talking to you, many people will not know that in one of the deadly Boko Haram attacks and coordinated bombings in Kano State, that resulted in the destruction of the headquarters of the Assistant Inspector General of Police, Zone 1, and the killing of over 120 people, including about 40 Policemen, over 15 Immigration, Customs and Federal Road Safety officers, the terrorists tried getting to the Kano Airport', the source said.

Vanguard was further told that the terrorists shot at an Air Force Helicopter gunship from the dreaded Sambisa Forests where several camps for recruitment, training and IEDS construction were located, using anti-aircraft technical guns from mounted vehicles, confirmed that indeed the terrorists were on course to carry out that plot.

From Borno and Yobe states, the ultimate strategy of the terrorists was to launch a jihadist type of invasion of the entire Northern part of the country hence the gradual build up of arms depots and training/recruitment centres in several parts of Yobe, Borno and lately Adamawa states where several raids were carried out on banks, prisons and police stations

It would be recalled that Vanguard exclusively reported in April, during President Goodluck Jonathan's official visit to Borno and Yobe states, that plans by Boko Haram terrorists to shoot at the Presidential Jet were uncovered hence the flooding of the two states with security operatives and deployment of technical equipment with ability to intercept signals of such attacks.