Couple Stab Each Other Over 'American Idol' Finale 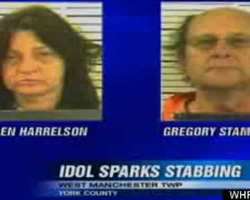 When a couple in Pennsylvania couldn't agree over which contestant - Candice Glover or Kree Harrison - should win this year's American Idol finale, they allegedly stabbed each other.

Only now, The York Dispatch reports, the two can't agree on who stabbed whom first.

Karen Elaine Harrelson, 48, and Gregory L. Stambaugh, 57, were arrested after the drunken fight Wednesday, May 15.

According to the affidavit obtained by CBS 21, Stambaugh told authorities that Harrelson started drinking at 5 a.m., 'and was drinking beer and a lot of tequila throughout the day.' He, on the other hand, claims he did not start drinking until noon and that he 'was drinking beer and had a pint of Scotch.'

Both alleged that the other went into the kitchen during the argument, grabbed a knife, and began the stabbing.

When police responded, the pair were on the front porch, bloody and still arguing, CBS 21 reported.

Harrelson and Stambaugh are nowbeing held in York County Prison,according to an inmate roster.

The Associated Press reported that authorities slapped the two with assault charges.

According to the Dispatch, both weretreated at a local hospital for minor injuries.