The Governor of Rivers State, Hon. Chibuike Rotimi Amaechi, CON, was yesterday re-elected as the chairman of the Nigeria Governors' Forum, NGF.'Amaechi, whose re-election was fiercely opposed by both President Goodluck Jonathan and the leadership of the ruling Peoples Democratic Party, PDP, got 19 votes to beat his challenger, Jonah Jang of Plateau State who got 16 votes.

'The election held at the Rivers State Government House,  Abuja in the evening.'In his acceptance speech, Amaechi said, 'Today our democracy was tested and proven. Democracy is about participation. The aim of democratic governance is for everyone to partake in winning. 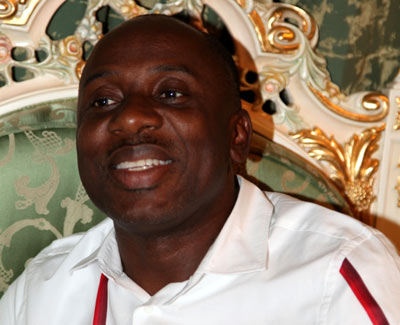 Gov Amaechi
Today the governors have spoken with one voice re-affirming our faith in democratic governance as the hope of Nigeria's future. I must thank my colleagues for their tenacity and determination to ensure the unity of the forum but more importantly of our nation.

'We remain committed to supporting our leader, the President and Commander in Chief of the Armed Forces of the Federal Republic of Nigeria, His Excellency, Dr. Goodluck Ebele Jonathan to realize the development dream of all Nigerians by reducing tension, uncertainty and insecurity in our beloved country.

'We want to pledge our steadfastness and resolve working alongside Mr. President to better the lives of our people as we render transparent and accountable stewardship. Finally our thanks go to all those who have patiently endured these times especially our constituents and members of the Fourth Estate of the Realm who have followed these elections with keen interest. We promise that we will not betray the confidence you have reposed in us.'

Earlier before yesterday, the Special Adviser to the President on Political Matters, Dr. Ahmed Gulak, said that the Presidency was interested in seeing another PDP governor take over from Amaechi as the NGF chairman. The presidency had accused Amaechi of opposing the establishment of the Sovereign Wealth Fund, SWF, even after the PDP had agreed on the matter.

On whether Jonathan would be ready to work with Amaechi if re-elected, Gulak  dismissed any talks of re-election saying it was alien to the forum.

Gulak said, 'The fact that the President met with the PDP governors was an indication that he is united with the governors. When has it become an aberration for him to meet the governors?

'The President is interested in any PDP governor, not necessarily Shema, taking over from Amaechi at the expiration of his tenure. There is no re-election for Amaechi. His tenure has expired except if he wants to extend his tenure and there is no tenure elongation in the NGF.'