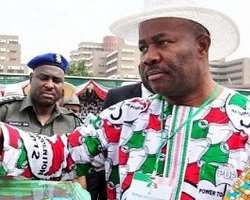 SAN FRANCISCO, May 24, (THEWILL) - This is definitely not the best of times for the Nigeria Governors Forum (NGF) as the body of all governors in the country has been plunged into a post-election crisis with the Governors of the Peoples Democratic Party Governors Forum (PDPGF) and at least two Governors of the opposition parties rejecting the re-election of Rivers State Governor, Mr. Rotimi Amaechi, as Chairman of the enlarged NGF, where the party maintains a convincing majority.


The Governors led by PDPGF Chairman and Governor of Akwa Ibom State, Chief Godswill Akpabio, in a briefing after the election of Amaechi, said the election conducted by Amaechi was unnecessary as 19 Governors mostly of the PDP who control the majority in the forum had previously endorsed and signed documents electing Plateau State Governor, Retired Air Commodore Jonah David Jang as Chairman of the NGF.

Governor Akpabio said some Governors moved to have the NGF adopt Jang as Chairman during the forum’s meeting but Amaechi overruled insisting on an election.


He insisted that it was morally wrong for Amaechi to preside over the NGF election since he was a candidate.


Akpabio argued that since the PDP maintained majority in the forum, it was clear that the NGF had elected Jang going by the signatories.


But some observers of the development see the latest development as a manipulation from the Presidency and the leadership of the PDP.


Maintaining that the PDP Governors are only crying wolf where none exists, they say they shouldn’t have submitted themselves to the election in the first instance if they knew the outcome would not be acceptable to them.


Others say the PDP Governors may have been caught unawares and beaten hands down in the political game by Amaechi, as they wouldn’t have thought in their wildest imagination that the embattled Rivers State governor could easily turn the table against them in spite of all their calculations.


Maintaining that the re-election of Amaechi as the NGF Chairman was a coup against the Presidency and the leadership of the ruling PDP, observers contend that what happened will serve as a signal to PDP on what to expect as another general election draws nearer.


The embattled Rivers State governor Friday evening in Abuja, had emerged reelected Chairman of the Nigerian Governors Forum (NGF) in a secret ballot.


His re-election came in spite of all the efforts and intrigues to frustrate his ambition by the President Goolduck Jonathan led Peoples Democratic Party (PDP) to which he belongs.

At a meeting held inside the Rivers State Governor’s Lodge in Abuja during which the election was conducted by secret ballot, Amaechi floored the Plateau State governor, Air Commodore Jonah David Jang (rtd), who is the consensus candidate of the PDP by 19 votes to 16.


Going by the result of the secret ballot, at least three Governors from the PDP jettisoned their earlier commitment in PDP Governors caucus meeting held inside the Akwa Ibom State Governor’s Lodge, Abuja, where the PDPGF, apparently banking on the majority of its members in the NGF, had unanimously settled for Governor Jang and Governor Olusegun Mimiko of Ondo State (LP) as its consensus Chairman and Deputy Chairman respectively in the NGF election in order to nail Amaechi’s ambition.


PDP sources told THEWILL that Amaechi did not attend the PDP Governors’ meeting as he was also holding last minute discussions with Governors of the opposition party on his re-election.


THEWILL can also report that several influential members of the PDP, including the Chairman of the party’s Board of Trustees, Chief Tony Anenih and Deputy Senate President Ike Ekweremadu, had at different meetings with Amaechi last night, prevailed on him to drop his re-election bid as the party had agreed to allow one of the governors from the north chair the forum.


But the re-election of Amaechi, who is the incumbent Chairman of NGF, is now seen in political circles as a grand coup against, and another big blow to, the Presidency and the leadership of the PDP, which had brazenly boasted through words and deeds that the Rivers State governor would not be re-elected as NGF Chairman. The plan to stop Amaechi, observers of the development say, started with the floating of the PDPGF with Akwa Ibom State governor, Godswill Akpabio, as Chairman.


Analysts of the development believe that the outburst of Akpabio, rejecting Amaechi’s re-election may destroy the NGF, which is now clearly split with a faction recognising Jang as Chairman.

“Today our democracy was tested and proven. Democracy is about participation. The aim of democratic governance is for everyone to partake in winning. Today the governors have spoken with one voice reaffirming our faith in democratic governance as the hope of Nigeria’s future. I must thank my colleagues for their tenacity and determination to ensure the unity of the forum but more importantly of our nation.


We remain committed to supporting our leader, the president and commander in chief of the armed forces of the Federal Republic of Nigeria, His Excellency, Dr. Goodluck Ebele Jonathan to realize the development dream of all Nigerians by reducing tension, uncertainty and insecurity in our beloved country.


We want to pledge our steadfastness and resolve working alongside Mr. President to better the lives of our people as we render transparent and accountable stewardship.


Finally our thanks go to all those who have patiently endured these times especially our constituents and members of the fourth estate of the realm who have followed these elections with keen interest. We promise that we will not betray the confidence you have reposed in us.”