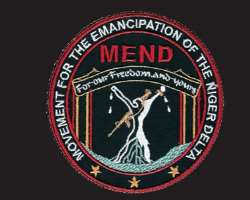 SAN FRANCISCO, May 23, (THEWILL) - Following President Goodluck Jonathan’s directive to the military to release women, children, relatives of fleeing wanted Boko Haram members and indeed some categories of Boko Haram detainees as part of the federal government’s push for peace in North, the Movement for the Emancipation of the Niger Delta (MEND) has demand the release of all detained Niger Delta militants as well.

MEND in a statement on Thursday warned of consequences if their demand is not met within two weeks.

The main militant group in the Niger Delta also advised the Minister of Niger Delta Affairs, Elder Godsday Orubebe to forget his 2015 governorship ambition in Delta State, saying the plan “will be frustrated as he is not needed in that state.”

The full text of the emailed statement reads:

“Ref: STATE OF THE NATION AS IT AFFECTS THE NIGER DELTA REGION.

We read with great concerns from the National dailies the press statement issued by the presidency that they (Presidency) intend to release from detention some Boko Haram members including their wives and children.

In as much as we are not against such a policy since it has no direct or indirect effect on our organization, we wish to bring to the attention of the Federal Government that there are and will be consequences for such an action if our members that are in detention centers all over the country for the past years are not released within the next 14 days (2 weeks).

Enough of all these injustice.

The minister of the Niger Delta Ministry Mr. Peter Godsday Orubebe is hereby advised to forget the Delta State Government house as any attempt on his part to contest for the 2015 Governorship election in the state will be frustrated as he is not needed in that state.

Furthermore, we (Mend) has resolved to stand beside Governor Chibuike Rotimi Amaechi of Rivers State at this trying time, what exactly has he done wrong? The answer is NOTHING! The presidency should hands off Rivers State, the state is undergoing transformation and any attempt to short change the Governor will spell doom for those that are been used.

We are issuing this final warning to Comrade Alhaji Mujahid Asari-Dokubo to stop using the Niger Delta Region as a platform to enrich himself, who made him an elder in the South South? On whose interest is his campaigning? Certainly he is not representing anybody within the region not even in our rural villages so whichever war he intend to fight should be done by him alone, throughout our existence as freedom fighters in the region, we’ve never seen anybody that talks as much as him does so for the last time, we are advising him to stop making references to the region when begging.

In conclusion, we advice the Government to release our members from their various detention centers within the next coming days or fail the fallout.