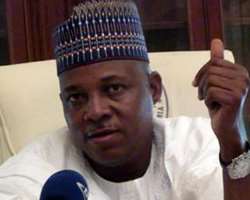 SAN FRANCISCO, May 22, (THEWILL) - Borno State governor, Kashim Shettima, has hailed President Goodluck Jonathan over the order to free some suspected Boko Haram members in various detention centres across the country, describing it as the right step in the right direction.


Shettima gave the commendation in a statement issued on Wednesday by his spokesman, Isa Gusau, saying the resolution of the Boko Haram crisis has been fast-tracked by the president order.


Maintaining that he looks forward to receiving some of the released detainees, the governor said: “I am in the picture of the very welcome development and I look forward to receiving them. It is a cheering news for me and the government of Borno State because it will no doubt help in fast tracking the peaceful resolution process which like I have always said, remains the long term solution to the crisis."

According to Shettima, "Releasing the detainees will further show the commitment and sincerity of the Federal Government to the peace negotiation which should attract the sect members to the negotiation table and increase community participation in the process."

Re-affirming the commitment of he Borno State Government to the negotiation process, Shettima said "The State Government is dutifully committed to every lawful and reasonable efforts that aims at the return of peace and security of lives and property in Borno, the Northern region and Nigeria in its entirety since no society can achieve any meaningful and steady progress in an atmosphere of violence."