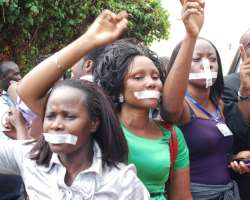 May 21, 2013-Ugandan police surrounded the Kampala offices of two private newspapers for seven hours on Monday, May 20, barring access to the premises, disabling printing presses, and effectively halting publication indefinitely, according to news reports. The police said they had search warrants to find documents related to a letter written by an army official that described an assassination plot.

One of the newspapers, Daily Monitor, had reported on an April 29 letter written by Gen. David Sejusa, or Tinyefuza, Coordinator of Security Agencies, to the director general of Uganda's Internal Security Organisation earlier this month.The letter, which Sejusaconfirmedwriting, called for an investigation into an alleged plot to assassinate senior government officials who were opposed to Brigadier Muhoozi Kainerugaba, son of President Yoweri Museveni, assuming the presidency in 2016, the Monitor reported. Museveni, who has been in office since 1986, is expected to step down in 2016.

Police surrounded the offices of the Monitor in the Namuwongo district of the capital on Monday, shut down the paper's printing press, and tried to shut down the paper's website, local journalists told CPJ. "Instead of carrying out the search, the armed men disabled the printing press, computer servers, and radio transmission equipment," the paper's managing director, Alex Asiimwe, said, according to news reports. Asiimwe said that the police had a search warrant to find the original letter written by Sejusa and other unspecified documents.

Police are continuing the search today and have refused most staff entry into the compound while the newspaper and website remain indefinitely shut down, Editor Charles Mwanguhya told CPJ. "We get the impression the [police] operation is not only a search but designed to punish the media house," he said.

Police also surrounded the Red Pepper offices in Namanve on Monday and disabled the paper's printing press, according to the paper's managing director, Arinaitwe Rugyendo, and news reports. "We were just having our editorial meeting when roughly 30 armed police surrounded the station," Rugyendo said. Local journalists told CPJ they were finally allowed to leave the premises on Monday at around 6 p.m.

On May 15, Red Pepper had published a press release said to have been written by Sejusa's lawyer that discussed the general's letter, according to a statement by the paper. The statement said that the paper had already complied with a court order and handed a copy of the document to the police, but that police had decided to search the paper's premises anyway. Police have also denied Red Pepper reporters access to the office.

Judith Nabakooba, a spokesman for the police, said in a statement that Ugandan police would continue to search the offices until the documents were found. In its statement, Red Pepper said they did not know what further documents police were looking for.

Around 2 p.m. Monday, police also shuttered two radio stations, Dembe FM and KFM, which are owned by Monitor Publications Limitedand are based in the same compound, local journalists told CPJ. Godfrey Mutabazi, chairman of the state-controlled broadcast regulator the Uganda Communications Commission, said the stations were temporarily suspended while the search at Monitor continued. News accounts reported that the commission said that broadcasts related to the Sejusa letter earlier this month were "not professional," according to news reports.

"Ugandan authorities are trying to censor news that is crucial to the public interest," CPJ East Africa Consultant Tom Rhodes said. "Authorities should immediately halt their efforts to silence Daily Monitor and Red Pepper, and they must allow these publications and related news outlets to do their jobs without further harassment."

Last week, a judge ordered Monitor to present its sources for Sejusa's letter, lawyer James Nangwala told CPJ. The publishers filed a challenge to the order, citing journalists' privilege in protecting their sources, he added.

Police also interrogated Monitor Managing Editor Don Wanyama and reporters Richard Wanambwa and Risdel Kasasira about their sources last week. The journalists were accused of non-cooperation with police requests for their sources for the Sejusa story, Wanyama told CPJ.

Civil society activists issued an impromptu protest outside of the Monitor'soffices around 5 p.m. Monday but were chased away by police with tear gas, Monitor journalists inside the office told CPJ.

Monitor and Red Pepper have been raided and their printing presses shut down before. Gunmen raided the Red Pepper premises in July 2008 and set fire to the paper's generator and printing press, Rugyendo told CPJ. The paper believed the assailants were security operatives, he said. Police also raided the Monitor in October 2002 after the paper published a story that claimed former rebels in northern Uganda, the Lord's Resistance Army, had shot down a government helicopter, according to local journalists.