Yahoo Buying Tumblr For $1.1 Billion, Vows Not To Screw It Up 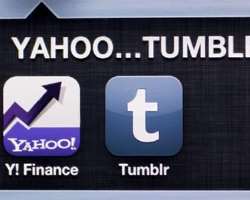 Yahoo Inc said it is buying blogging service Tumblr for $1.1 billion cash, giving the struggling Internet pioneer a much-needed platform in social media to reach a younger generation of users.

The deal, announced on Monday, is a bold bet by Yahoo Chief Executive Marissa Mayer to revitalize the company by co-opting a Web property with strong visitor traffic but little revenue.

The acquisition, which will use up about a fifth of Yahoo's $5.4 billion in cash and marketable securities, is the largest by far since Mayer took the reins in July with the goal of reversing a long decline in Yahoo's business and Web traffic.

Analysts said Yahoo appeared to be overpaying for a business that might not contribute to revenue for years, but that it had to do something to plug a hole in its social media efforts.

RBC Capital Markets analyst Mark Mahaney called it a "long-shot/long-term investment" but one that fits into Mayer's turnaround strategy.

"(Yahoo's) fundamentals have been subpar for numerous years, in part because of the company's missing presence in Social and Mobile. Tumblr may help (Yahoo) develop that presence," Mahaney said in a note.

Tumblr is one of the Web's most popular hubs of so-called user-generated content. The deal will help Yahoo reach a younger generation of users less tied to traditional Web portal and email services.

Though Yahoo remains one of the Web's most popular destinations, it has seen its revenue shrink in recent years as consumers and advertisers favor rivals such as Google Inc and Facebook Inc. The deal is expected to increase Yahoo's audience by 50 percent.

Yahoo made clear it was sensitive to concerns that it might somehow damage Tumblr by making it less irreverent or more corporate.

"Per the agreement and our promise not to screw it up, Tumblr will be independently operated as a separate business," Yahoo said in a statement.

RICH PREMIUM
Media reports have pegged Tumblr's 2012 revenue at $13 million. The privately held company, based in Manhattan, does not disclose its financial results.

"Even if revenue was $100 million, it means Yahoo paid 10 times revenue," said BGC Financial analyst Colin Gillis. "Ten times is what you pay to date the belle of the ball. It's on the outer bands of M&A."

Yahoo could quickly boost Tumblr's revenue by combining the website with its own sales force, said Pivotal Research Group analyst Brian Wieser. But loading Tumblr up with banner ads risks alienating its users and probably wouldn't provide a significant lift to Yahoo's overall revenue, he said.

"It's not clear that this deal will be favorable from a return-on-capital perspective," Wieser said. "One billion (dollars) for one company is a big bet."

Gillis and Wieser were contacted on Sunday after the deal was reported by the online publication All Things D.

Mayer, on a conference call with analysts on Monday, described the Tumblr deal as an exception and said Yahoo was not necessarily planning to make lots of similarly sized deals.

Shares of Yahoo rose in early trading on Monday but quickly gave up those gains and were little changed at $26.54. Through Friday's close, they had risen 70 percent since Mayer became CEO.

IMAGE ISSUES
One question Yahoo may have to address is Tumblr's reputation as a home for pornographic blogs. At one point in 2009, about 80 percent of Tumblr's top sites had something to do with adult content. Today that number is closer to 5 percent, according to Quantcast data, but the perception remains.

Dealing with that issue may fall to David Karp, 26, who founded Tumblr in 2007 and will remain CEO.

Karp, a self-taught programmer who left high school in favor of home schooling, did not take part in Mayer's conference call. Media reports have suggested his take in the billion-dollar sale would top $200 million.

In a 2012 interview with The Guardian, Karp seemed to be less interested in money than in Tumblr's prominence.

"There are a lot of rich people in the world. There are very few people who have the privilege of getting to invent things that billions of people use," he said.