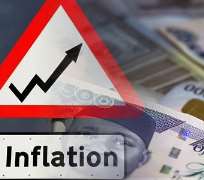 Nigeria's inflation rate in 2013 continues to be below 10 percent for the fourth month in a role. According to the numbers coming from The National Bureau of Statistics (NBS), the 2013 April inflation rate stood at 9.1 per cent, much higher that of March 2013 which was 8.6 percent.

"Sanusi and his gang at Central Bank of Nigeria have made it their agenda to lower inflation rate below 10 percent since 2009. But that has been elusive, except in July and August 2011, when the inflation rate registered 9.4 and 9.3 per cent respectively. Since then the inflationary trend has been surging without subsiding. This latest development has been almost four years since the inflation rate was below 10 percent. CBN must be walking on the sky for its latest achievement but this is not the time to beat one’s chest for the fight and struggle against inflation is a ceaseless battle that never ends," as Emeka Chiakwelu, Principal Policy Strategist and Analyst at Afripol stated earlier at OTC.

And for this recent development of taming inflation rate below 10 percent, the ranks and files at Central bank of Nigeria deserved some credit for tackling inflationary trends with aggressive monetary policy, which essentially entails mopping of the liquidity without drastically slowing down economic growth.

As for April 9.1 percent inflation rate, National Bureau of Statistics (NBS), narrated that: "Relative to March, the rise in the headline index could be primarily attributed to higher price levels of food products due to the effect of declining inventories. At this time in the planting season, what is sold are food products which were harvested, late last year and the limited supplies of these farm with a relatively stable demand, pushes prices higher. As in March, the Core sub-index exhibited a muted rise due to base effects. Between March 2012 and December 2012, the Core Sub-index recorded substantial year-on-year price increases (an average of 14.2% compared to 11.8% over the same period in 2011). As a result of substantially higher price levels last year, the implications are that the year-on-year changes for this year are likely to be lower. Additionally, we observed generally slower rises in monthly prices since 2013. This may be connected to more prudent fiscal measures together with aggressive stance of monetary policy. It."

National Bureau of Statistics reasoning on the rising of the inflation rate from March 8.6 percent to April 9.1 per cent of this year was illogical and disjointed. The depletion in the inventory was a result of the massive flooding that interrupted harvesting which brought a serious damage to agricultural products and farmlands. In addition scarcity and high price of petrol propel the price of staple foods and essential consumer products. The flooding made transportation fare higher due to deterioration of roads and longer time to get to the destination. All these factors brought about higher cost of delivery and subsequently higher prices that trigger higher inflation rate.

In the first quarter of 2013, the economy registered a growth of 6.56 percent slightly below the preceding fourth quarter of 2012 at 6.99 percent.

Within the two broad sectors of the economy, the non-oil sector growth was driven by growth in ac-tivities such as building & construction, ho-tels & restaurants real estate services, manu-facturing, finance & insurance and solid minerals, among others. The output in the oil sector however, decreased in the first quarter of 2013 relative to the correspond-ing quarter of 2012."

These figures, with their associated gas compo-nents, resulted in a growth rate, in real term of -0.54 percent in oil GDP in the first quarter of 2013 compared with the –2.32 percent for the corresponding period in 2012.

During the period under review, the Nigerian oil sector witnessed some levels of disruptions as a result of pipelnie vandalisation and bunkering inci-dents with some oil companies such as Eni (Agip) declaring force majeure during the quarter. How-ever, the sector also benefited immensely from the relative stability in international crude oil market price and the exchange rate of naira against the dollar .

At the moment the Central Bank of Nigeria maybe basking in the sun for the laudable accomplishment in keeping the inflation rate below 10 percent. But CBN and financial policy makers cannot afford to rest on its laurels rather must be back on the saddle to keep mapping out the strategy for the long term maintenance of low to moderate inflation rate.

Keeping inflation rate below 10 percent and even lower at 4 or 5 percent will be an omen that Nigeria is consistently winning the battle against inflation with sustainable, durable and good microeconomics fundamentals that will enhance and strengthened investors and capitalist faith in the country’s economy.

The interest rate at 12 percent should not be permanent fix on the monetary policy as tinkered by Sanusi and the rest of monetary committee.

A high interest rate is not the best method to encourage and propel local enterprise and capital growth in the country. Interest rate at 12 percent will discourage borrowing especially among small and new marketers. Nigeria will not be obsessed with foreign investors at the expense of its local investors and rising business owners. It is intrinsic and necessary for the policy makers to utilize monetary policy and fiscal policy to stimulate trade and industry to the advantage of local investors who do create most of the jobs in the economy.

High interest rate at 12 percent does not incentivize local producers and business community to borrow more and invest in their industry and craft.

More or less the higher interest rate contradicts growth policy and subsequently may lead to economic contraction as less business is developed. Therefore with less indigenous economic development comes more unemployment, which does not bode well for a country struggling to maintain sound macroeconomic stability.

In overall the Nigeria economy continues to show healthy growth according to the statistics coming from NBS. But the higher unemployment among Nigerians and increasing poverty are indications that the economy is not growing fast enough to absorb the unemployed and to lift Nigerians from poverty.

The needs to provide durable and sustainable infrastructures are the greatest challenge to the leaders and policy makers of Nigeria. The increasing lawlessness which includes vandalism, kidnapping, terrorism and indiscipline are wrong recipes and condiments for sustainable economic growth.