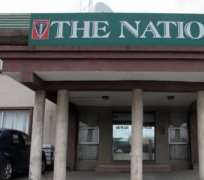 SAN FRANCISCO, May 19, (THEWILL) – The Nation newspaper financed by Bola Tinubu, the founder of the Action Congress of Nigeria (ACN) and an activist, Morakinyo Ogele, are to jointly pay the sum of N750 million naira as damages to Mr. Segun Ilori, a lawyer, journalist and former Chief of Staff to the former Governor to Ekiti State, Chief Segun Oni, according to a ruling of an Ekiti State High Court.

The defendants are also to publish an apology in three national newspapers for the defamatory publication in The Nation of Wednesday, May 12, 2010 headlined: "Lawyer petitions NJC over bribery allegation Against Election Tribunal Judges."

In the judgement delivered on Friday, May 17, 2013, Justice Adewale .K. Fowe, held that the Claimant, Ilori proved his case having led evidence unchallenged by the defendants.

He said the claimant's evidence and those of his witnesses: Messrs Eric Teniola, Lekan Omoboye and the exhibits submitted showed that the publication was false, malicious, defamatory and injured his reputation.

The court held that although defendants filed conditional appearance and defence, they ignored several opportunities for cross examination and defence. He cited several cases of requests for adjournments and non attendance at proceedings without excuse and other antics by the defendants.