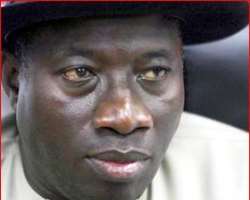 of necessity' to empower Dr. Goodluck Jonathan as Acting President.

meeting, NBA said the National Assembly's resolution would only temporarily

creates in the polity.
The NEC which commended its President Oluwarotimi Akeredolu (SAN) for standing

by the constitution and the people of Nigeria, said it will refrain from making further

comment on the issue because the matter is pending in court.

The country's democracy was threatened following refusal of President Yar'Adua's

pending his return from Jeddah, Saudi Arabia, where he is receiving medical

treatment.
The National Assembly, however invoking the “doctrine of necessity” passed

decision that has generated mixed reactions from legal experts, groups, as well as

politicians.
Some Nigerians have gone to court praying that the court should declare the

resolution on Jonathan illegal and unconstitutional.