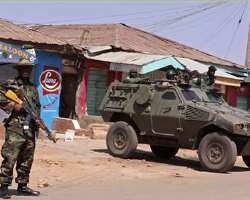 A 24 hours curfew has been imposed by The Joint Task Force, JTF, in some areas considered as Boko Haram hide out in  Maiduguri the Borno State capital.

The Curfew is aimed at crushing suspected Boko Haram Militants and prevent people from coming into the area during operation.

“The Joint Task Force (JTF) in order to sustain special operations in the face of recent Boko Haram attack in some areas within Maiduguri metropolis is imposing 24 hours curfew with effect from today, Saturday 18 May 2013.

Musa however, appealed to residents  to continue to “cooperate with the security agencies by providing credible and timely information.”