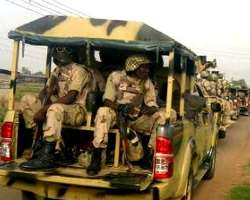 SAN FRANCISCO, May 17, (THEWILL) – No fewer than 20 Boko Haram gunmen were killed on Friday as troops of the Nigerian Army engaged the insurgents in a fierce battle in the Sambisa Forest considered as one of the strongest hideouts of the sect in Borno State.

The attack on the stronghold of the sect followed the massive deployment of troops as well as land and aerial bombardment of Boko Haram camps in Borno, Yobe and Adamawa States following Tuesday’s declaration of emergency rule by President Goodluck Jonathan in the three states.

A top security source who disclosed this on condition of anonymity said the attack was made possible through the grounding of all mobile telecommunication networks, a strategy which, according to him, broke the communication networks of the sect members who are spread in camps in the forest of Sambisa, Mafa, Wulgo and Kirenowa axis of Borno State.

“So far so good, there has been positive progress in the ongoing operation in Sambisa, and we are not pulling out until we are done with them,” the source said, adding “After a surprise raid yesterday, at least 20 of the terrorists were gunned down by our troops and several are running around the jungle with serious injuries.”

The Sambisa Forest, which spreads over a distance of 300 square kilometres from Damboa up to Gwoza, Bama and the Cameroon border, has been a hideout and training camp of the Boko Haram - one of which was discovered early this year when a military raid was launched there.

Meanwhile, the Nigerian Army has completed the deployment of its troops to the troubled spots in the three states. The troops, according to a top senior member of the military Joint Task Force (JTF) in Maiduguri, the Borno state capital, reached the border towns of Ngala, Marte, Mafa and Konduga in Borno state; and Geidam, Gashua and Yusufari border towns of Yobe State with Niger Republic on Wednesday.

And to prevent the Boko Haram members from fleeing their training camps located in various parts of the two states, all four telecom firms’ services of MTN, Etisalat, Airtel and Globacom were “shut down” in the early hours of Thursday in both Borno and Yobe states.

Their networks could not also be accessed from neighbouring Niger, Cameroon and Chad.

But the grounding of telecommunication networks was relaxed in Maiduguri on Friday.

The deployment came as a blast went off at the Maiduguri Monday Market (MMM) on Wednesday at about 3pm which forced many traders to flee and close up their shops and market stalls as they scampered for safety.

The Improvised Explosive Device (IED) was said to have been placed in a black plastic bag by the gutter along the one-way road , before it blasted, killing two people, and rupturing the stomach of a passerby.

A senior police officer, craving anonymity, confirmed the blast on Thursday, saying a bomb blast went off Wednesday afternoon at the Monday Market, where two people were feared killed, while one person was injured in the stomach.

He said there were no arrests made by either the police of JTF.-

Meanwhile, a senior member of the military Joint Task Force (JTF) in Maiduguri, the Borno state capital, confirmed that troops had already reached the town.

A senior military officer also disclosed that the troops are concentrating on two targeted areas, namely the training camps and the border communities where the Boko Haram members live and launch attacks on the military, police and Nigerian Immigration formations.

The troops, according to the officer, are also concentrating on border posts at Gamboru, Banki, Daban Masara, Baga, Kughum in Borno State; and Geidam, Yusufari and Gashua, 185 kilometre north of Damaturu in Yobe State.

He added that there are also four training camps of Boko Haram in Yobe States located at Gujba, Geidam, Gashua and Yusufari, 240 kilometres north of Damaturu,the state capital.

However, aside the Wednesday afternoon blast which left two persons dead in the Post Office Central area of Maiduguri, the city has so far enjoyed an over 48 hours of calm without a sound of gunshot since the declaration of emergency rule on Tuesday.