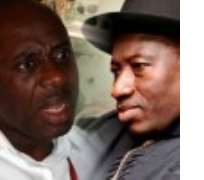 
The 'cold war' between Chibuike Amaechi of Rivers State and President Goodluck Jonathan that has inundated the media apparently began with Governor Amaechi’s rather unsavoury remarks against the President and reached a crescendo with his remarks on the East/West Road under the supervision of the Niger Delta Affairs Ministry. Since then, these remarks have gone beyond mere superficiality to reveal the inner mind of Governor Amaechi his cronies and ‘attack dogs.’

We live in times where a democratic government behave like a tyrannical military regime. There are bound to be face-offs, but to allow it descend into political witch-hunt is a sure recipe for anarchy.

Governor Amaechi believes he is being persecuted for speaking truth to power on vexed issues of excess crude account, sovereign wealth fund, true federalism, fuel subsidy removal and disapproval for the spendthrift that has depleted Nigeria's foreign reserve.

I do not sympathise with him on his travails. My brief here is to make a case for the practice and adherence to the tenets of true democracy. The clandestine plans to impeach him is nothing short of despotism. For the continuous survival of our democracy, it must be roundly condemned.  Amaechi and Jonathan are from PDP, same party that has institutionalised corruption and entrench impunity in the country. A lacked of internal democracy in the party has resulted in the roforofo fight between the pair.

Amaechi's sins would have been less grievous if he wasn't the chairman of the NGF. President Jonathan's aides believe he should have used his position to rally support for policies and initiatives of the president rather than turning it to an opposition platform. He has done nothing to suggest he is working against Jonathan’s 2015 re-election bid. The presidency is set to bully Amaechi to either tow the line of Jonathan’s 2015 aspiration or face the music of refusal.

His modest performance in Rivers state puts him head and shoulders above other PDP governors. Over the years, the governor has built a well recognised political structure that will make it a herculean task to unseat him.

Doyin Okupe, in response to the 'persecution' of Amaechi was quoted as saying there must not be opposition within a party. It would have made more sense if he told us how Amaechi's actions summed up to disrespect or contempt for the highest office in the land. Such ideological differences are meant to deepen democracy and governance.

Special Adviser to the President on Political Matters, Ahmed Gulak, questioned the rationale behind Amaechi's spat with Jonathan, insinuating it is to trumpet his own presidential ambition. Gulak stopped short of telling us when Amaechi declared for the 2015 presidential race. He posited that Amaechi's tenure has come to an end so he must hand over. To him, he is ineligible to run for re-election. In the same vein, Gulak can douse much of the heat in the polity by advising President Jonathan at the expiration of his Frankeinstein administration not to run for a second term in 2015.

There are some two million votes at stake in Rivers state. In the 2011 presidential votes cast for the PDP, Rivers votes dwarfed the combined votes of Bayelsa, Edo and Cross Rivers state. The thinking of the Jonathanians is, if the President must win elections come 2015, the state must be firmly under the control of a loyal PDP governor. Hence, the reason for the surreptitious impeachment moves. The ruling party cannot discountenance the role Rivers played in the emergence of Jonathan during the 2011 elections neither can they discount the fact that votes from Rivers state effectively swung the victory from the South-South in Jonathan's favour.

Governor Amaechi tenure as NGF Chairman ends in May, and he plans to seek re-election inspite of his present troubles. Already, the Northern Governors' Forum had resolved to vote for Amaechi to ensure the NGF is strong enough to prevent manipulation by the President. Meanwhile, the President has held meetings with PDP-GF, to intimate them of his anointed choice of Governor Ibrahim Shema of Katsina state.

The infamous role the First Lady, Patience Jonathan, has played in the crisis has inflamed rumours that she is pushing for Nyesom Wike as governor in 2015. Meantime, she is preoccupied, along with other aides in hushing dissenting voices to Jonathan's pesky 2015 ambition.

The buck stops with PDP. That the National Leadership of the party has left such a crisis to linger leaves much to be desired. The ruling party is a house in perpetual disarray. The Nation it has governed for the past 14 years fair no less. The chairman, Bamanga Tukur has pitched his tent with the President.

Scratching beyond the surface of this squabble is the Minister of State for Education, Nyesom Wike, President Jonathan's puppeteer. He contributed immensely in the post election battle that ensured Amaechi reclaimed his mandate. But now, he has exploited his closeness with the First Lady to trigger the roforofo fight. It's a battle between Jonathan and Amaechi, instigated by Wike. And there is the First Lady, Patience Jonathan, sandwiched somewhere inbetween.

The thinking of the presidency is that the NGF 'now behave like an opposition party to the federal government'. This much was contained in a letter that Chief Edwin Clark, widely regarded as the President's 'godfather,' had allegedly written to members of the NGF.

Amaechi is believed to be “eyeing” a shot at the Presidency.  He has given credence to this by responding to virtually all national issues particularly those that affect the President. It has been misinterpreted as an indication of his Presidential ambition.

As the election of a new NGF chairman draws near, Mr Jonathan through the instrumentality of the state pile trouble on Amaechi. The shenanigan is needless if the president can sleep with his two eyes closed since the PDP-GF was formed as the PDP Chairman, Bamanga Tukur told Nigerians.

The gulf between President Jonathan and Amaechi is widened by the deepening political crisis. If it snowballs to chaos, it can be used to discredit the governor, setting the tone for impeachment.

As the federal government continue the rabid dismembering of Amaechi's political apparatus across the state, it remains to be seen, how long it will take for the gulf between Amaechi and Jonathan to become wide enough before a successful political incision can be made.