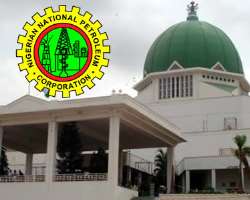 ABUJA, May 13, (THEWILL) – The House of Representatives committee on Public Accounts, on Monday, directed the Nigerian National Petroleum Corporation,NNPC, to remit a whopping N326billion to the Consolidated Revenue Fund of the Federation in a month or face prosecution.

The House order followed a query from the Office of the Auditor-General of the Federation which indicted NNPC.

NNPC Group Managing Director, Mr Andrew Yakubu, was to appear along with the Federal Inland Revenue Service, FIRS, Petroleum Products Pricing Agency,PPPRA, the Accountant General of the Federation among others over the Auditor -General's query on the fuel subsidy regime.

He however for the third time, sent the General Manager,Process and Procedures,Mr Abdullahi Kalami, to represent him instead of the Corporation's Executive Director Finance and Accounts,Mr Bernard Otti.

But the Committee sent out Kalami, insisting that he lacked the capacity to stand in for the Corporation on the issues raised as it ruled that NNPC must pay the N236billion to the consolidated Revenue Accounts of the Federation.

However, the Executive Director of Finance and Accounts, Otti, made a sudden appearance at the venue of the sitting about three hours after the ruling of the committee and claimed that he was on medication but the Committee turned down his request to make his presentation and advised him to liaise with its secretariat to enable it to attend to other agencies that were already hours back.

Meanwhile, the Central Bank of Nigeria,CBN, on Monday clarified that the N2.8billion being queried by PAC was used for the reconstruction of a new office complex for its Port Harcourt branch and not for the renovation of the old complex as earlier claimed.

Deputy Governor of CBN in charge of Corporate Services,Mr Suleiman Barau, who made the clarification before the Committee on Monday supported his claims with relevant documents including the photographs showing the old and the new building side by side.

Following this, the committee cleared the CBN on the query but insisted that its members would still visit Port Harcourt for on the spot assessment of the old and the new building while the bank should also be ready to provide additional information on the contract where necessary.

On the query raised on the N844m property purchased for the National Planning Commission by the CBN,the Committee stepped down and requested for additional documents from both parties to enable get to the root of the transaction.

The Committee therefore condemned the sale of the official residence of the Governor of the bank built on an acre of land at a prime location in Abuja at a give away price of N160million to a private company and directed the bank to proceed to the Corporate Affairs Commission,CAC, by Tuesday to find out the owner of the company and its directors.