Would CAN elect Desmond Tutu President? 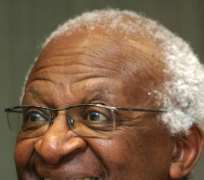 Emeritus Archbishop of Cape Town, Desmond Tutu, is arguably the most recognised African churchman in the world today. Even those who do not know his name or have a detailed knowledge of his activities and achievements will recognise the face of that ever-jovial old man Nelson Mandela once described as a 'man in a dress'. There are, of course, many other African born church leaders that can count on more power, more authority, more money, more charisma, more miracles and even more devotion from their flocks than Desmond Tutu. The Emeritus Archbishop of Cape Town might have more followership and global recognition than most African born church leaders combined, but I doubt if he can ever attain the status of our 'Men of God' in Nigeria. Regardless of all his achievements and service to the church and humanity in general, I doubt if he would have ever made it as the President of Christian Association of Nigeria as it stands today.

For starters, that role has just been filled again via the recent re-election of Pastor Oritsejafor. We join others in sending him our congratulations. According to reports, Pastor Oritsejafor was overwhelmingly supported by his fellow men and women of God that formed the corpus of voting delegates, and he landed a whooping 80 votes, while his only opponent, Rev. Oyekunle, had only four votes. One hopes that the CAN electoral committee will be kind enough to publish the full list of all those delegates that voted during the election.

In 2010, the founder and Senior Pastor of Word of Life Bible Church, Warri, Delta State, was elected with 66 votes. So this is not just a re-election, it is a tangible proof that even more Nigerian church leaders than before endorsed the direction and activities of CAN under the leadership of Pastor Oritsejafor. Luckily, our own CAN is more democratic and more progressive than the Vatican, so we should be able to read a report on the spiritual, theological, moral and political factors that led those 80 men and women of God to reconfirm Pastor Oritsejafor leadership. They have all seen him perform in the last three years, so they clearly know what they voted for.

Even if the role had not just been filled, I doubt a man like Tutu has the kind of fatherly conciliatory government loving temperament our men and women wallow in. He has a lot to learn from Nigerian pastors, rather than merely praying for our leaders and sending messages that it is well with us as individuals, and hoping that somehow it will be well with us as a nation. Tutu actually believes in analysing and judging political parties and politicians by their utterances and performance in office. Without anyone forcing him to take a stand, and rather than just enjoying the privileges of being a friend of those that matter around the world, this old man called Desmond Tutu, for altruistic reasons, took pen and paper to write that he will not be voting ANC in the next elections.

It must be said at this point that very few people have supported the South African ruling party as much as the now Emeritus Archbishop of Cape Town. Yet, based on pure analysis of reality and his empathy with and concern for the suffering masses, Desmond Tutu has had to conclude that the ANC is at best a good freedom-fighting unit, but now incapable of leading a political transition capable of delivering development to South Africa. As a man that knows his country well and possesses a sense of history, Tutu has felt the need to warn his fellow citizens of the need to stop voting with their hearts and to start choosing a government based parties' policies rather than emotional attachment to the liberation movement. His main areas of concern are the country's growing inequality, the developing culture of corruption, unaccountability and weakness in the country's constitution.

So similar are these issues that you might think you were reading about the problems facing Nigeria. It will, however, become clear that you are not reading about Nigeria, when you realise how incomplete the list of problem is. There is no mention of lack of basic infrastructure and essential services, such as education, health, security and electoral malpractices.

Little surprise though, Desmond Tutu is not new to such positions. He after all made his mark internationally not for owing a jet or performing miracles, but through his knowledge of theology, standing up for the oppressed and speaking the truth to power. Listen to him when in 1975 he became the Anglican Dean of Johannesburg: “I realise that I had been given a platform that was not readily available to many… Well, I'm going to use this to seek to try to articulate our aspirations and the anguishes of our people”.

Little surprise indeed, long after Tutu showed the world how the church can help people against tyranny and bad governance, Nigerians had to deal with brutal military regimes and corruption, and we are yet to discover the positions of many of our most prominent men and their women of God against those that oppress and abuse power.

Disclaimer: "The views/contents expressed in this article are the sole responsibility of Anthony A. Kila and do not necessarily reflect those of The Nigerian Voice. The Nigerian Voice will not be responsible or liable for any inaccurate or incorrect statements contained in this article."
Articles by Anthony A. Kila
2-7-2013  Simple Questions For This New Apc24-6-2013  What Apc Owes Nigerians12-6-2013  Look Who’s Ruling29-5-2013  The Burdens Of Islam15-4-2013  The Favour Godswill Akpabio Did Us AllMore...