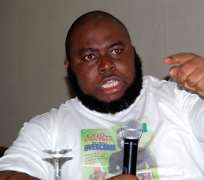 SAN FRANCISCO, May 09, (THEWILL) – Leader of the proscribed Niger Delta People's Volunteer Force (NDPVF), Alhaji Mujahid Asari-Dokubo, on Thursday, declared that nobody can arrest him.

He said any attempt to arrest him would make Nigeria history.

Dokubo was reacting to the adoption of a motion by the House of Representatives calling on the Inspector General of Police, Mr. Mohammed Abubakar, to arrest him for saying that there would be no peace in Nigeria if President Jonathan is not returned for a second term in 2015.

The Niger State governor, Alhaji Babangida Aliyu; other northern leaders, and organisations, including the Arewa Consultative Forum (ACF), also called for his arrest.

But daring the House of Representatives and leaders of northern Nigeria to arrest him if they can, Dokubo, who addressed a press conference in Abuja on Thursday, said he stood by his words that there would be no peace in Nigeria if President Goodluck Jonathan is not re-elected in 2015.

Dokubo said they would be cowards if they failed to arrest him.

"I am daring them to arrest me if they can, if they don't, they are cowards and shame on them. There will be no peace for the man who does not want peace," he said.

Dokubo also queried why those calling for his arrest turned deaf ears when some northern leaders like former military Head of State and 2011 presidential candidate of the Congress for Progressive Change (CPC), General Mohamadu Buhari, Alhaji Lawal Kaita and a former member of the House of Representatives Adamu Farouk Aliyu, among others, threatened to make Nigeria ungovernable if a northerner failed to emerge as president in 2015.

"I stand by my statement which I made in my earlier press conference. There will be no peace, not only in the Niger Delta, but everywhere, if Goodluck Jonathan is not president by 2015, and I want to add that the Fulanis, who migrated and invaded our lands and continue to show disregard and disrespect to the owners of the country they came into, and people have tolerated them for a very long time, but that will no longer continue.

"I want to refresh your memories with comments made by these Fulani invaders who have in the time past threatened war and break of Nigeria. In 2010, a Fulani, one Lawal Kaita said and I quote: “Anything short of a Northern President is tantamount to stealing our Presidency. Jonathan has to go and he will go. Even if he uses the incumbency power to get his nomination on the platform of the PDP, he would be frustrated out...The North is determined, if that happens, to make the country ungovernable for President Goodluck Jonathan or any other Southerner who finds his way to the seat of power on the platform of the PDP against the principle of the party’s zoning policy.""

"That was what Kaita said in 2010, and today insurgent groups in furtherance to Kaita's call and from the feudal Fulani occupiers of our land, Are wreaking havoc, attacking military barracks and seizing weapons and their foot-solders in the army are planning a coup, because at the top they can't plan a coup, but Goodluck Jonathan is sitting and watching, but we will not sit and watch.

"For every action from them, there will be an equal and opposite reaction and it will be disproportionate.

Kaita made this statement, nobody arrested or call for the arrest of this fellow, today he is walking free.

"After Kaita, another Fulani, who had used our money to overthrow a democratically elected government, a corrupt Fulani, who they call General Mohamadu Buhari, made this statement and I quote: "God willing, by 2015, something will happen. They either conduct a free and fair election or they go a very disgraceful way. If what happened in 2011 (alleged rigging) should again happen in 2015, by the grace of God, the dog and the baboon would all be soaked in blood.

"Buhari made this statement in 2012, he was never arrested and nobody ever called for his arrest. In other countries, former leaders are being tried, but here, a man who overthrew a legitimate government, continue to threaten us with blood and nothing has happened. He took our guns, our resources, to plan and overthrow a legitimate government and introduce retroactive laws that led to the death of innocent citizens, and nothing has happ ened," a visibly angry Dokubo said.

"To crown it all," he said: "another Fulani invader of our homeland, a former member of the House of Representatives, and a member of Congress for Progressive Change (CPC), they call him Farouk Adamu.

"Aliyu, said and I quote: 'Let me also use this opportunity to say on behalf of us in the north that nobody has monopoly of violence and that on behalf of the people of northern extraction, there shall be no one Nigeria if a northerner is not elected president of this country, because politics is a game of numbers and the Ijaw people are not up to one million or two million or even five million.'

Reacting to Aliyu's calls that the Ijaw people do not have the population to match the north, Dokubo said: "This Fulani invader is talking about population, we all know that they don't have the number they claim to have and we know that we are more populated than they, and no figure they bring will be accepted by us. This Fulani invader said this, nobody called for his arrest and he was never arrested.

"I am saying it bold and clear without menacing words, that the consequences of my arrest, Nigeria will be history. The last time Obasanjo arrested me, my arrested reduced Nigeria oil production to 700,000 barrels per day, this time, it will reduce it to zero barrel, and we will match violence by violence, intrigues by intrigues, we are ready for them, Goodlcuk Jonathan will complete his tenure of two terms whether they like it or not. For us: they don't even exist because we pay them, he who pays the piper decides the tune. We pay them, we feed them, they are parasites, they are a burden on us, these invaders must be expelled from our lands, they have no reason to be with us," he said.

Condemning the killing of innocent Nigerians in the north, he added: "When we were in the creeks of Niger Delta, we fought for a just cause, we never killed innocent people, but they continue to kill and people tell us to leave them alone, that time is gone and gone forever. It is in their best interest to behave because they have no value, they're destitute and parasite, they contribute nothing, we feed them and still condone their excesses, but we will no longer condone their excesses."