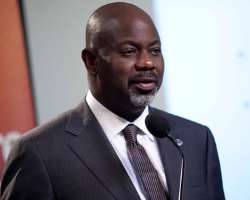 
Ita in a statement issued in Calabar, said media reports to the contrary were therefore, not true.


He explained that what the Governor told party caucuses was that while it is the legitimate right of every local government chairman to seek a second term, such aspiration should not be un-mindful of the zoning arrangement in each local government.


According to the Governor, upholding the principle of zoning will ensure equity and guarantee peace.


"His Excellency also insisted that while the Constitution allows every chairman to seek a second term in office, this however, is not automatic. It has to be earned through performance in office," Ita wrote.


The Governor harped on the need for consensus building in the course of selecting flag-bearers for the forth-coming local government elections.


It is the Governor's view that consensus would reduce rancour and rift that often characterize such exercises, ensuring the party goes into the election without divisions.


According to the statement, the Governor used the occasion of the meeting to urge stakeholders in the party to give more opportunities to women if the state is to march the 35 per cent affirmative action.