Israel to Assad: Air Strikes Did Not Aim To Help Syria Rebels 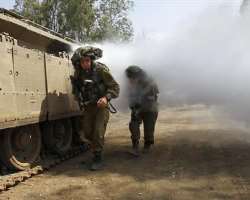 Israel sought to persuade Syrian President Bashar al-Assad on Monday that recent air strikes around Damascus did not aim to weaken him in the face of a two-year rebellion, and played down the prospects of an escalation.

"There are no winds of war," Yair Golan, the general commanding Israeli forces on the Syrian and Lebanese fronts, told reporters while out jogging with troops.

"Do you see tension? There is no tension. Do I look tense to you?" he said, according to the Maariv NRG news website.

Israel has repeatedly warned it will not let high-tech weaponry get to Iranian-backed Hezbollah, with which it fought an inconclusive war in 2006.

Damascus accused Israel of belligerence meant to support outgunned anti-Assad rebels. The air strikes were tantamount to a "declaration of war", it said, and threatened unspecified retaliation.

Veteran Israeli lawmaker Tzachi Hanegbi, a confidant of Prime Minister Benjamin Netanyahu, said on Monday that Israel did not want to clash with Assad.

Interviewed on Israel Radio, Hanegbi said the Netanyahu government aimed to avoid "an increase in tension with Syria by making clear that if there is activity, it is only against Hezbollah, not against the Syrian regime".

Israel is reluctant to take sides in Syria's civil war for fear its actions would boost Islamists who are even more hostile to it than the Assad family, which has maintained a stable stand off with the Jewish state for decades.

Hanegbi said Israel had not formally acknowledged carrying out the raids in an effort to allow Assad to save face, adding that Netanyahu began a scheduled week-long trip to China on Sunday to signal the sense of business as usual.

The Israel prime minister did not comment about Syria during a visit to Shanghai on Monday.

"DIPLOMATIC CHANNELS"
Yedioth Ahronoth, Israel's biggest-selling newspaper, said the Netanyahu government had informed Assad through diplomatic channels that it did not intend to meddle in Syria's civil war.

Israeli officials did not immediately confirm the report, but one suggested that such indirect contacts were not required.

"Given the public remarks being made by senior Israeli figures to reassure Assad, it's pretty clear what the message is," the official told Reuters on condition of anonymity.

Al-Ikhbariya, a pro-government Syrian television station, on Sunday said Assad had rockets ready to fire at Israel if it struck again. Damascus would also permit guerrilla attacks against Israel across the Golan Heights, Al-Ikhbariya said.

Hanegbi said Israel was ready for any development if the Syrians misinterpreted its messages and was ready "to respond harshly if indeed there is aggression against us".

As a precaution, Israel deployed two of its five Iron Dome rocket interceptors near the Syrian and Lebanese fronts and grounded civilian aircraft in the area, although an Israeli military spokesman said the airspace would reopen on Monday.

Analysts say Syria would be no match for Israel, a U.S. defense ally, in any military showdown. But Damascus, with its leverage over Hezbollah, could still consider proxy attacks through Lebanon.

Tehran, which has long backed Assad, whose Alawite minority has religious ties to Shi'ite Islam, denied Israel's attack was on arms. Shi'ite Hezbollah did not comment.