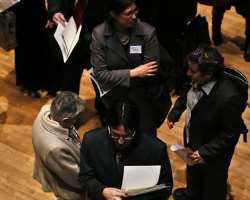 Employment rose more than expected in April and hiring was much stronger than previously thought in the prior two months, easing concerns belt-tightening in Washington was dealing a big blow to the economy.

Nonfarm payrolls rose 165,000 last month and the jobless rate fell to 7.5 percent, the lowest level since December 2008, the Labor Department said on Friday.

"Overall, a strong set of numbers which will reassure markets that the U.S. economy is not as weak as it may have seemed given some of the earlier data," said Andrew Grantham, an economist at CIBC World Markets in Toronto.

Economists polled by Reuters had expected April payrolls to rise 145,000 and the unemployment rate to hold steady at 7.6 percent.

U.S. stocks rallied on the data, while government bonds fell hard. The dollar strengthened against the yen and pared losses against the euro.

The drop in the jobless rate reflected a gain in employment, rather than people leaving the workforce. The workforce actually expanded, while the labor force participation rate - the share of working-age Americans who either have a job or are looking for one - held steady at a 34-year low of 63.3 percent.

Still, some details of the report remained consistent with a slowdown in economic activity. Construction employment fell for the first time since May, while manufacturing payrolls were flat.

The average workweek pulled off a nine-month high, with a gauge of the overall work effort falling, but average hourly earnings rose four cents.

The relative strength of the data was particularly surprising given other recent signs that suggested the economy had slowed sharply in recent weeks. Although the economy expanded at a 2.5 percent annual pace in the first quarter, a wide range of data suggested it ended the period with less speed. Further, factory activity barely grew in April.

FISCAL HEADWINDS
Economists feared uncertainty over the full impact of higher taxes and deep government spending cuts on already sluggish demand was making businesses reluctant to hire. A 2 percent payroll tax cut ended at the start of the year, and $85 billion in federal budget cuts went into effect on March 1.

"The idea that the employment is holding as well as it is in the face of the fiscal headwinds the economy is currently enduring is a very positive sign of the economy's underlying fundamental improvements," said Russell Price, senior economist at Ameriprise Financial Services in Troy, Michigan.

While the pace of hiring was stronger than expected in April, it remained below the pace needed to put a significant dent in the jobless rate.

Economists said the data did not appear strong enough to dissuade officials at the Federal Reserve from pressing forward with their bond-buying stimulus, although it could cool speculation the U.S. central bank would step up its purchases.

On Wednesday, the Fed said it would continue to buy $85 billion in bonds each month and that it would increase purchases should the need arise.

"I don't think today's data is strong enough to completely offset some of the weakness we have seen in some other areas, such as overall manufacturing activity and the general pace of economic growth, so I think the Fed will remain fully engaged," said Price.

All the job gains last month were in the private sector, which added 176,000 new positions. Gains were led by a rebound in retail employment, which had dropped in March after eight straight months of increases. Retail payrolls rose 29,300.

But construction employment surprisingly fell, shedding 6,000 jobs after 10 straight months of gains. Residential construction has been marching higher and the pullback in construction jobs could be the result of cold weather in April.

Government payrolls dropped 11,000 after falling 16,000 in March. Most of the job declines last month came from the federal government and the U.S. Postal Service.