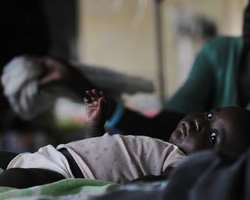 SAN FRANCISCO, May 02, (THEWILL) – The Borno State Commissioner for Health, Dr. Salma Anas Kolo, Thursday, said a total of 178, 000 cases of malaria were recorded in the state last year while 311 persons died of the disease.


Kolo made the disclosure while speaking at a press conference to mark the celebration of World Malaria Day in Maiduguri, the state capital, saying however that the State Government achieved a lot last year in its effort to control the disease.

She listed the achievements made to include the training of 810 health care providers on malaria commodity logistics system.

The commissioner also said the state was nominated as the best malaria performing state last year as well as chosen as one of the 12 sub-recipients states for the Global Fund to Fight Malaria.

She said the state had from last year till date distributed over 30,000 insecticide-treated nets, mostly to pregnant women to control the disease.

Kolo listed the major highlight of this year’s celebration with the theme, Invest in the Future, Defeat Malaria, to include the sustenance of political commitment for malaria prevention and control, encouraging donors to form global partnership against malaria for research and the call on academic institutions to flag off scientific advances to both experts and members of the public, among others.