Gareth Bale Named Player Of The Year By Football Writers 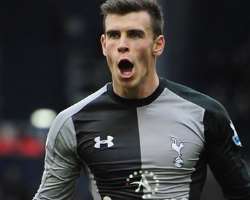 Tottenham Hotspur's Gareth Bale has been named as the Football Writers' Association Footballer of the Year.

Bale has scored 19 goals in 29 Premier League appearances this season.

Bale has helped Spurs reach the quarter-finals of the Europa League and maintain a challenge for a top-four place in the Premier League.

Manager Andre-Villas-Boas believes the former Southampton man will stay at White Hart Lane even if the club misses out on a place in next season's Champions League.

"The information that I have from the club is that the player is here to remain, independent of the objectives of Champions League qualification being achieved or not," said Villas-Boas.

"I would be extremely surprised if he left.
"We understand that the more awards the more recognition the player will have, the more media attention, but the club has to move forward by holding onto its best players."

Bale, who took 53% of the votes, said: "It is a huge honour to receive the Footballer of the Year award from the Football Writers' Association.

"It means a lot to win this award when you consider the number of players that have been outstanding for their clubs in the Premier League this season."

Bale becomes the first Spurs player to win the award since David Ginola in 1999 and the first Welshman since goalkeeper Neville Southall in 1985.

"I have been very fortunate to be playing in such a fantastic team and I owe a lot to my team-mates and, obviously, the manager who has shown such faith in me," continued Bale.

"This award has been won in the past by some of the greatest names in football and I consider it a privilege that the FWA has selected me to be named alongside them."

Bale is the 15th man to win the PFA and FWA awards in the same season, with former Arsenal striker Thierry Henry and ex-Manchester United winger Cristiano Ronaldo completing the double twice.

Ronaldo's success in 2007 is the only other occasion when the same player has won the FWA and both the PFA player and young player of the year awards.

Bale will receive the prestigious prize, which was first presented to Blackpool's Stanley Matthews in 1948, at a dinner in London on 9 May.

Chairman of the FWA Andy Dunn, chief sports writer for the Sunday Mirror, said: "In a contest for votes that took so many late twists and turns, Gareth's penchant for the spectacular captured the imagination.

"He is a player who is rising inexorably towards the rarefied levels of world stars such as Lionel Messi and Cristiano Ronaldo.

"Twice the PFA Player of the Year and now, two months before his 24th birthday, the FWA Footballer of the Year. Let's all hope he lights up the Premier League for many seasons to come."