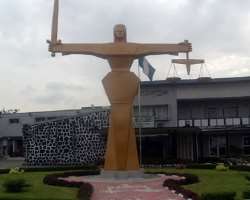 SAN FRANCISCO, April 30, (THEWILL) – A Federal High Court in Abuja has nullified the disbandment of the National Task Force against Illegal Importation and Smuggling of Small Arms and Light Weapons .


The presiding judge, Justice Elvis Chukwu, while delivering judgment, Tuesday, in a suit filed by the Task Force and its chairman, Dr. Osita Okereke, also blamed the Federal Government for the increased proliferation of arms across the country as he declared the disbandment of the National Task Force illegal.


The court also set-aside a directive issued by the Nigerian Customs in 2011 disbanding the Task Force, stressing that such action was not only inimical to national security, but also breached the rules of natural justice.


Aside this, the court also dismissed the preliminary objections filed by the Federal Ministry of Finance and the National Security Adviser, NSA, challenging the competence of the suit on grounds that the applicants, led by its chairman, Dr. Osita Okereke, failed to declare any reasonable cause of action.

The applicants had approached the court and prayed it to determine whether the action of the NSA in disbanding the National Task Force which was inaugurated by the Federal Government on July 16, 2010, sequel to an allegation that was levelled against it by the Nigerian Customs , without granting the organisation fair hearing, was not illegal, unconstitutional and null and void.

Specifically, the Nigerian Customs had alleged that the organisation attempted to usurp its duties by trailing and seizing several containers containing arms that were illegally imported into Nigeria.

It was further alleged that the Task Force operated illegally considering that it was not duly registered with the Corporate Affairs Commission, CAC.

However, in his judgment, Justice Chukwu maintained that the respondents failed to prove that the Task Force usurped the duties of any government agency.

“The respondents had claimed that the inauguration of the Task Force was carried out in error.

"However, the court will want to know at what point this error occurred. From the totality of evidence before the court, it is obvious that there had been a reasonable communication between the applicant and the respondents.

“It is my considered view that there was a breach of the rules of natural justice as the applicants were disbanded without being accorded opportunity to defend themselves. They ought to have been given a hearing before the Task Force was disbanded.

“The court has the jurisdiction to exercise judicial review of such decisions whenever there is denial of fair hearing in any proceeding, be it administrative or ministerial. The court has the powers to declare it a nullity.

“However, let me state that this court will never encourage any organisation to meddle in the affairs of a government agency. The mandate upon which the applicant was set up is clear, to identify sources and main routes of illegal importation of light weapons and arms, as well as, liaising with security agencies to combat the menace of arms proliferation.

“The Task Force was established under the Private-Public-Partnership which does not require registration with the CAC. The initiative was aimed at improving the security of lives and properties in Nigeria. We are all witnesses to the effect of proliferation of light arms in this country vis-à-vis the achievements that were recorded by this task force, an averment that was not denied by the respondents.

“In fact, the precarious nature of security lapses in the country today will even make this court to grant the application as prayed in this suit. This court is convinced that the application has merit and is accordingly granted. I therefore issue an order quashing the directive of the 2nd respondent disbanding the applicant, same having breached the rules of natural justice,” Justice Chukwu stated in his ruling.