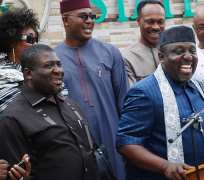 SAN FRANCISCO, April 30, (THEWILL) – The Imo state Governor, Owelle Rochas Okorocha has returned to Owerri, the Imo State capital after undergoing further evaluation and treatment in the United Kingdom due to a head injury he sustained in a car crash in Orlu last week.

Okorocha expressed his gratitude to Imo People for their prayers and concern while he was away.

The Governor while addressing journalists shortly after his arrival from London at the Government House Owerri advised motorists to drive carefully and avoid driving when under the influence of alcohol or impaired.

“I was involved in a motor accident which gave me a cut. I sustained a minor head injury and I had to travel out of the country after brief treatment at a private hospital at Orlu, to re-examine the position of the injury that I sustained, I want to tell that I am fine, healthy and I am grateful to God Almighty,” he said.

Okorocha also made a token of two hundred thousand naira (N200, 000) to Hon. Chief Osita Patrick Nnewuihe from Oru East, the man whose vehicle was involved in the accident, to enable him repair his vehicle and seek further treatment.

In his speech, Nnewuihe thanked the governor for his magnanimity and love for him and his family during the incident.

He further thanked God for saving their lives and prayed God to continue to protect Governor Okorocha and his family.