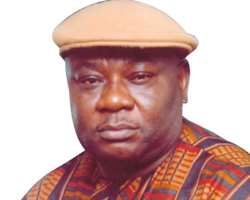 SAN FRANCISCO, April 30, (THEWILL) – For failing to tender an unreserved apology to Governor Godswill Akpabio of Akwa Ibom State within the seven days ultimatum given him, the constituents in Ikot Ekpene Senatorial District , Tuesday, resolved to recall their representative at the National Assembly, Senator Alloysius Etok.


Rising from a stakeholders meeting which held at the headquarters of the zone, Ikot-Ekpene, the constituents maintained that the process of his recall had begun as they maintained that it was even too late now for the embattled Senator to tender any apology.


Comprising of prominent sons and daughters, traditional rulers, the political class and top government functionaries, the stakeholders expressed disappointment over the senator’s alleged barrage of insult on Akpabio.


Moving the motion to recall Senator Etok was his kinsman, Engr. Iboro Ekamen of Ekpom Ward 5 in Ikono Local Government Area of the state, who advised Governor Akpabio to stop looking for campaign chairmen for his senatorial ambition as he promised the governor overwhelming support.


Convener of the meeting and traditional ruler of Annang ethnic group, (Itai Afe Anang) Okuku Pius Eside, while explaining the rationale behind the meeting, said they had invited Senator Etok on April 20 to appear before them for reconciliation between him and the governor but the Senator refused to honour the invitation.


He said the stakeholders considered the senator’s refusal to attend as an insult and therefore had no option than to begin the recall process to serve as a deterrent to others.


Chairman of the Essien Udim, Mr. Nse Ntuen, who spoke on behalf of the ten Local Government chairmen from the zone, said the district will go ahead with the resolve to recall the senator, stressing that the senator has added a new dimension to the case by accusing Akpabio of complicity in the kidnap of his mother last year.


The Deputy Speaker of the state House of Assembly, Elder Udo Kirian, in his remarks, said the lawmakers from the district were not happy over the senator’s poor representation after six years at the National Assembly.


He alleged that the senator had not held any constituency briefing nor attracted any development to the area, saying the senator was taking the long silence of the people for foolishness.


In an interview with journalists, the member, representing Ikot-Ekpene/Oboro Okara constituency at the state House of Assembly, Mr. Nsikak Ekong, expressed disappointment with the Senator over his poor performance at the National Assembly.


“He has been Senator for nearly six years and he has never briefed his constituency, he has not told us the motion he has moved, and the constituency projects he has attracted to the people . So, we are angry with him,” he said.