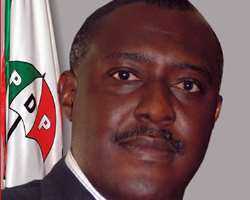 SAN FRANCISCO, April 29, (THEWILL) – The national leadership of the Peoples Democratic Party (PDP) has described the speedy resolution of the Adamawa crisis as “a product of the forthrightness of President Goodluck Jonathan as well as a testament to the ability of the PDP, as a truly democratic party to accommodate the interest of all in the handling of its issues”.

The party also commended the efforts of the Governor Sule Lamido-led PDP ad-hoc committee on Adamawa as well as elders and leaders of the party in the speedy resolution of the crisis in the State chapter of the party.

PDP National Publicity Secretary, Chief Olisa Metuh, in a statement issued on Monday, said the National Working Committee (NWC) of the party had received the report of the Governor Lamido-led committee and endorsed its recommendations.

According to the statement, the committee recommended that the Executive Committee at the Ward and Local Government levels should remain as per the National Working Committee (NWC) ratification of 29th August, 2012.

The committee also recommended that the State Working Committee of the party should be harmonised to accommodate all interests.

It also recommended that stakeholders, including the National Chairman and the Governor should, in the interest of the party and progress of the State, soft-pedal on their previous positions, and work towards ensuring harmony among all PDP members in the State.

The statement therefore called on all members of the party in Adamawa State to rally round the PDP candidate in the rescheduled State Assembly election so as to ensure that the party retains its pre-eminent position in the State.