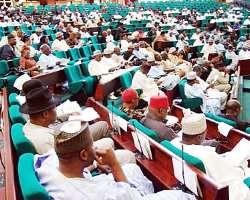 ABUJA, April 24, (THEWILL) - The Senate on Wednesday rejected a Bill that seeks to provide remuneration for past Nigerian military presidents and Heads of State.

The Bill sponsored by Senator Victor Ndoma-Egba also sought to provide remuneration for former presidents, heads of Federal Legislative houses and Chief Justices of the Federation.

The Bill was thrown out at plenary. Opponents advanced reasons bordering on the fact that it was in conflict with an existing provision of the Constitution.

Most Senators during debate said the Constitution had already recognised and given roles to past military Presidents.

THEWILL recalls that a similar Bill was passed by the fourth, fifth and sixth sessions of National Assembly but it failed to receive presidential assent for inexplicable reasons.

Leading debate, Ndoma-Egba told lawmakers that the Bill also sought to acknowledge the services of people who rose through hard work and commitment to certain positions constitutionally by providing for them after office, "as this will encourage dedicated leadership from present leaders when they know that their efforts will not go unnoticed."

In his contributions, Senator Smart Adeyemi said all military leaders who have derailed democracy should tender an apology to Nigerians and that they should be banned from participating in politics.

However most of the lawmakers opposed the Bill due to its constitutional illegality and that incentives are already provided for the past military rulers as they are part of the Council of States meetings.

Senator Abubakar Sadiq Yar ’Adua opined that emphasis should be on how well a past president served irrespective of being a military or civilian president.

Yar’Adua said: “The question should be what the past leaders have contributed to governance, how well he has served the nation irrespective of coming through the uniform or Agbada.

Meanwhile, a Bill for an act to provide for the Establishment of the Nigerian Merchant Navy Security and Safety Corps with the responsibility for the security and safety of Nigerian Merchant Navy was withdrawn by the sponsor of the Bill, Senator Joshua Lidani, on the grounds that he needs to do more work on the Bill after it was discovered the Bill is in conflict with many existing agencies.