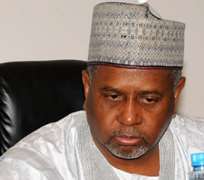 ABUJA, April 23, (THEWILL) - The National Security Adviser to the President, Col. Sambo Dasuki (rtd), Tuesday, attributed the drastic change in the climate in the country to the increasing rate of kidnapping, restiveness in the Niger Delta and the terrorist activities of the Boko Haram sect in the Northern part of the country.

The NSA, who disclosed this when he appeared before the House Committee on Climate Change led by Hon Eziuche Ubani(PDP-Abia), also made a case for the establishment of a National Grazing Route by the Federal Government to halt the continuing clashes between herdsmen and farmers which have resulted in several casualties.

Represented by the Special Adviser on Economic Intelligence, Prof. Soji Adelaja, the NSA explained that there was a connection between climate change and criminality in Nigeria. Other members of the team who represented the NSA were Gen. T.T Waya , Director of Internal Security, Mr A.Nyam, Amb. L.Laseinde and Amb. Haruna Wando, Director of Communications.

Nyam, had in response to a question from a member of the committee, explained that there was a connection between the current state of insecurity and climate change.

In his own submission, Adelaja lamented the continuing clashes between herdsmen and farmers in several states, describing the situation as disturbing.

He told the committee that President Goodluck Jonathan has held a meeting with governors to solve the problem.

He said the governors however rejected the President's proposal at the meeting for a grazing route in each state.

He called for the cooperation of the National Assembly to help in the formulation of a legislation for the establishment of National Grazing Route to end the incessant clashes.

Adelaja told the Committee that all tiers of government must cooperate to avoid a repeat of the climatic disasters experienced in 2012.

" State governments in disaster prone areas should be tasked to support the proactive activities of disaster mitigation and relief in dissemination of information , adaptation and relocation of citizens from vulnerable areas.

"Following the early predictions which have been produced by NIMET for the year 2013 , active participation of all stakeholders, including THE Office of the National Security Adviser (ONSA) is required to ensure that information is circulated nationwide ,with concentration on disaster prone areas," he said.

He also suggested that luxury car owners as well as those who run diesel generators should pay taxes to be used by government to fight back floods and other natural disasters.

Commenting on the presentation from the NSA's office, Chairman of the Committee, Hon. Ubani, accused the Federal Government of ignoring climate problems.

He urged the Federal Government to devise ways of addressing the continuing blood-letting arising from clashes between herdsmen and farmers, assuring the presidential delegation that the Committee will work with the executive on how to address the problems associated with climate change.