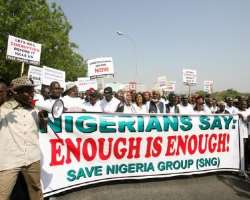 San Francisco Feb 14, (THEWILL) - The Save Nigeria Group (SNG) has rejected the National Assembly resolution that made Vice President Goodluck Jonathan Acting President, describing it as a "booby trap" for the Vice President and nation.

The pro-democracy/pro constitution group which held rallies in Abuja, Lagos, London and New York in January to press the National Assembly to compel ailing President Umaru Yar'Adua to transmit a written declaration to the Assembly, has also given the executive council of the federation two weeks to declare the ailing President incapacitated to allow the Vice President take over constitutionally.

"The Save Nigeria Group (SNG) has carefully reviewed the resolution passed by the two chambers of the National Assembly on Tuesday 9th February 2010, invoking the "doctrine of necessity'" to pronounce Dr Goodluck Jonathan as the "Acting President" of the Federal Republic of Nigeria. The review meeting, which had the convener of the Democratic Front for Peoples Federation (DFPF), Prof. Wole Soyinka and other critical leaders in attendance resolved as follows:

"1. That the SNG's protest marches in Abuja, Lagos, London, and New York were motivated by the need to restore the dignity of Nigeria and its people through a constitutional resolution of the power hijack by a cabal which kidnapped a sick man who is incapable of knowing what is going on and acting in his name to subvert the will of the people and orderliness in our country, and not just an anyhow pronouncement of Dr. Jonathan as an ''Acting President'',

"2. That the pronouncement by the National Assembly making Dr. Jonathan “Acting President” by a strange interpretation of a questionable BBC interview as a substitute for the written declaration the President ought to have made before leaving the country amounts to rigging and a manipulation of Section 145 of the Constitution. Only the unwary will not see through the booby trap in having an ''Acting President'' who is not sworn in by those who got an outgoing Chief Justice of Nigeria to swear in his successor.

"3 That while we want Dr Jonathan to assume full Presidential powers, his natural right by the constitution, we reject the extra constitutional invocation of the "doctrine of necessity'", which is a dangerous precedent that could become handy to execute an unpopular agenda against the people in the future.

"4. That apart from placing one man and his kidnapers above the Nation, Nigeria has once again been presented with a Shonekan who was kicked out unceremoniously by General Sanni Abacha after a court declared the contraption he headed illegal in 1993. We are not ready to go that route anymore.

"5. That it has become imperative that a logical and constitutional process of installing Dr. Jonathan as President with a Vice- President must commence immediately with the Executive Council of the Federation passing a resolution declaring Yar'Adua incapacitated in compliance with section 144 of the constitution. We insist that the session where the resolution would be taken must be beamed live on National Television.

"6. That the invocation of section 144 will not only permanently resolve the log jam but will restore the esteem of Nigerians which has been badly damaged by all sort of lies which the criminal cabal has fed them with in the last 80days on the health of the President as we press for the prosecution of all those involved in the forging of the signature of the President on the supplementary budget.

"7. That failure by the Executive Council of the Federation to carry out this demand by its next two sittings (February 17 and 24, 2010) will attract the wrath of Nigerians and SNG and its allies will storm Abuja in a big way to insist on doing the right thing to save our country from the snare of the cabal programming Nigeria for avoidable disaster.”

The executive council of the federation usually seats on Wednesdays and may deliberate on the group's demand.