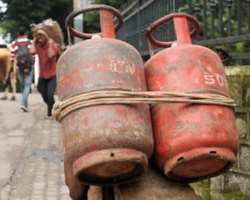 Before we hear an explosion in another part of the country different from their hotbeds and think that the boko haram sect has enlarged its frontiers, let us know that we have an off-specification commodity in this country with the tendency of creating a devastating impact similar to their craft.

This bootleg goods refers to the adulterated cooking gas imported into the country from Niger Republic by some businessmen without scrupulousness. In the stead of cooking gas, they have imported imminent deaths into Nigeria in a sheer bid to widen their profit margin!

Imminent deaths because the Niger-sourced Liquefied Petroleum Gas(LPG) otherwise known as cooking gas has a greater proportion of the highly explosive propane than the LPG sourced from the Nigeria Liquefied Natural Gas(NLNG) Limited and refineries within the country which consists mostly of the less dangerous butane.

As at last year, the Chairman LPG Group, Lagos Chamber of Commerce and

Industry- Mr Bambo Ademiluyi had said, "Propane is stored at a higher pressure. Most of our vessels, tanks and cylinders are not designed to store that level of propane. We are not used to such level of pressure."

This subject was substantially buttressed at the Annual General Meeting of the Nigerian Association of Liquefied Petroleum Gas Marketers (NALPGM) which held in Lagos last Tuesday. There, the outgoing president of the Association- Mr Mouruff Onabule who confirmed the circulation of the dangerous LPG in Nigeria warned NALPGM members to desist from patronising the variant from Niger Republic.

Also speaking, the National President of Liquefied Petroleum Gas Reps Association of Nigeria- Mr Odo Gbolahan belaboured the fact that the pressure of the gas imported from Niger Republic was four times higher than that of the cooking gas used in Nigeria.

According to him, "The propane gas they are bringing from the Niger axis is four times the pressure of the gas that is meant to be used in Nigeria. The propane gas is meant to be used in the Western world with cold climate because the rate at which the LPG will be evaporating in that place is very low. The propane is not meant for Nigeria with hot climate because the pressure can burst cylinders and hoses."

But given that the situation is this dire and that it has lasted for a while, why are we yet to record any publicised case of an explosion caused by the adulterated cooking gas. I guess this is one of the instances where our intercessory prowess pays off.

It is a common knowledge that no other nation comes close to us in terms of our devotion to religion. We are so religious that our bigotry begets us doing unimaginable things for our faith but when it comes to living the morally-sound life advocated by our religions we falter.

Little wonder we have con-businessmen who place more premium on profit than on the life of a fellow human. But what shall it profit a businessman if he makes all the money and in the process cause the death of others? Absolutely nothing but ultimate woes and eternal damnation!

Like I was saying, it isn't as if the mischief of these perverse marketers couldn't cause mayhem. Our prayers for God's protection must have kept the danger in the loop. Even the prayer of a neighbour who wouldn't want himself and his belongings consumed, should the dreaded happened, could have made it appear as if there is no danger inherent in the debased product.

But we can't continue this way and expect the Almighty to watch our front when we can effectively handle that. Yes, it has become a case of asking Him to watch our front because some are in the know of the imminent danger attached to buying the risk-filled LPG yet they go for it because it appears cheaper. But they forget the dictum that a cheap commodity isn't cheap after all and even forget that of pigeon English version which held that, "awuf dey run belle."

Though a truism that the cooking gas currently being supplied by the NLNG and Nigerian refineries is exorbitant, it doesn't warrant the marketers selling to Nigerians an LPG of 15 bars when what is recommended for our environment is that of five bars. Shouldn't the welfare and safety of our people rank more than whatever money or returns a marketer stands to make?

Some have reasoned that the criticisms is just a propaganda aimed at favouring the NLNG in the competition between it and its rival's product coming in from elsewhere. However, while this may be true, different experts and other stakeholders have at least adduced unassailable justification that should make us want to tow the path of safety.

If the foregoing is the truth, then should the marketers involved in the vicious act be made to know that they are not different from the boko haram adherents who have unleashed countless deaths and terror on this country. Both parties stands to share the same nemesis in an event of the wicked marketers' greed effecting any explosion!

It is greatly unacceptable for stakeholders, especially the hierarchy, to warn its members to desist from patronising the LPG sourced from Niger Republic and leave it at that. The lures of quick cash can easily make members with banal virtue not to heed such warnings.

They should set up a task force that will see to it that the consumers are not allowed to buy deaths or danger in the name of buying cooking gas. Where such a task force exists, it should be emboldened to bite and not just bark.

The federal government cannot be left out in the face of this sharp practise gaining grounds among marketers of LPG. It should as a matter of necessity crash the price of the locally-sourced LPG so that the perverse marketers will have nothing to hold on to in luring gullible consumers to its side.

Government agencies like the Standard Organisation of Nigeria(SON), under whose remit squarely falls this issue, should step up their pace in removing substandard LPG from the reach of consumers. The consumer themselves should apply caution when buying cooking gas so as not to buy a product that would be detrimental to them and those around them.