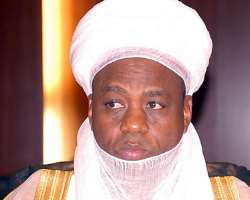 SAN FRANCISCO, April 16, (THEWILL) - The Sultan of Sokoto, Alhaji Sa'ad Abubakar III and other Northern Emirs, have called on President Goodluck Jonathan to kick-start the proposed amnesty for Boko Haram members by releasing members of the sect currently being detained by security forces across the country.

The Northern Emirs made the call, Tuesday, during a private meeting they had with the President at the State House in Abuja.

The meeting was the second within ten days and came after the one held with the Northern Elders Forum (NEF), which focused on the debilitating security situation in many parts of the north and the consequent effect this has had on socio-economic issues.

President Jonathan was joined at the meeting by Vice President Namadi Sambo; Secretary to the Government of the Federation, Senator Pius Anyim; Minister of Information, Labaran Maku, Minister of FCT Bala Mohammed; Chief of Staff to the President, Chief Mike Oghiadomhe; Head of the Civil Service of the Federation, Alhaji Boni Aji and the National Security Adviser, Col. Sambo Dasuki (rtd.)

Disclosing what transpired at the meeting, the Emir of Kazaure, Alhaji Najeem Hussein Adamu, told State House correspondents that the meeting was in continuation of the on-going consultation with the president on the way out of the insurgency.

According to the Emir, “The meeting was about the state of the nation, the security challenges we are facing. We sought the appointment and the opportunity for the President to know our views about the security situation and how to go about resolving the crisis.

"We recommended the use of dialogue as one of the strategies to resolve the security challenge and at the same time to devise strategies that will encourage or lay the foundation for sustainable peace in this country.

"Our presentation was preceded by long time discussion and deliberation. In a nutshell, what we sought to do is to give our views having regards to our background, our knowledge of various societies, various communities what we think should be done to resolve the crisis and ensure sustainable peace in the country.

"The issue of amnesty came up, it formed part of the strategies we are recommending but of course it has to be done properly with better appreciation of the situation rather than haphazardly which people think should be the case.

"We believe that we have to give very serious consideration and make sure that whatever we do is sustainable."

Minister of Information, Labaran Maku, said the traditional rulers gave the President a template about how to handle the situation.

"The issues raised in the paper concerned the ongoing efforts by the Federal Government, particularly on the security challenge.

“The Sultan and all the traditional rulers commended the President for his patience and handling of the insurgency in the north in the last two years and particularly also commended him for handling the situation in such a way that it has not been seen as if the insurgency is being instigated by people who don't like him or religious community in the country.

"They said the President's mature handling has saved the situation in the country despite the various security incidents we have seen in the northern part of the country," Maku said.

However, a presidency source disclosed that the Northern monarchs were concerned about the outcome of the amnesty considering the nihilistic nature of the insurgents as some of them, namely the Emirs of Kano, Damaturu and Fika, had been targets of terrorists attacks and only escaped miraculously.

"They (the Emirs) are worried because they know from antecedents that the Boko Haram people do not respect them at all," the source said. “They know they cannot be able to ensure that the sect members come out but they do not want to rest on their oars.

"The situation is dicey but the need for peace in particularly Kano, Maiduguri and Damaturu is overwhelming. So, they want to see how the opening gambit of the negotiation will be less futile."

The group had demanded an unconditional release of its arrested members as well as the re-building of their destroyed mosques, freedom to practice their faith and call for justice to be done to them.

However previous efforts by the Federal Government to dialogue with the sect’s leadership had failed. The previous moves included the Galtimari committee, peace brokerage by Sheikh Dahiru Usman Bauchi, a leading Islamic scholar and Dr. Datti Ahmad, President of the Supreme Council for Sharia in Nigeria (SCSN).