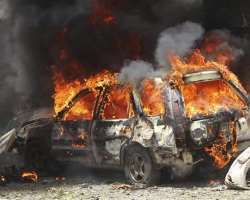 Somali militants linked to al Qaeda warned on Monday of further attacks in the capital, a day after killing at least 30 people in a wave of coordinated bombings and shootings that exposed the fragility of security gains in Mogadishu.

African peacekeeping troops blocked off streets and searched houses across the city at dawn on Monday to flush out suspected members of the Islamist militant group al Shabaab which claimed responsibility for the strikes.

But the rebels warned of further attacks and taunted the Mogadishu government, which they brand a Western stooge, over its trouble securing the city at a time the country struggles to emerge from more than two decades of conflict and anarchy.

Although a military offensive under an African Union peacekeeping banner has pushed al Shabaab from urban strongholds in central and southern Somalia, the attacks reinforce concerns the militants remain a potent force.

At least one car bomb exploded and several suicide bombers blew themselves up in front of Mogadishu's law courts on Sunday. Gunmen stormed the court compound, spraying it with bullets. Two hours later, a car bomb was detonated near the city's fortified airport.

The law courts were a symbolic target. Somalia's new government has made reforming the judiciary a priority in its campaign to shake off the country's "failed state" tag.

The scale of Sunday's attacks suggest the Islamist militants remain well organized, enabling them to infiltrate the city from which they were driven out two years ago and target vital installations with apparent ease.

Western and Somali officials voice concerns that the militants were seeking to rebuild their strength in the capital.

"It will be almost impossible to eliminate al Shabaab," lawmaker Mohamed Farah Jimale told Reuters. "They will regroup and continue bombing."

Britain, which has a large Somali population and has warned of threats to its own security from Somalia-trained militants, had warned last week of an imminent attack in Mogadishu, highlighting the international networks involved.

Somalia's finance minister said the attack reinforced the government's call for more aid to pay and train its security personnel as it seeks to rebuild the nation of 10 million people.

"It proves that we need the support of friendly countries to help us in improving the security forces' capability in Mogadishu and other areas," Mohamud Hassan Suleiman told Reuters.

A more stable Somalia could help curb piracy, which has flourished in the absence of an effective central government, and would soothe worries that Somali Islamists could expand territory they control which could be used as a training ground for militants who could strike elsewhere.