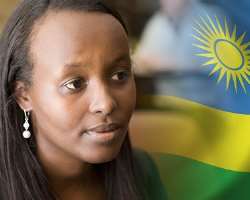 Waking up one day to hear that her entire family had been slaughtered sounded like a horror movie to Jacqueline Murekatete. And yet it happened to her and scores of men, women and children in the east African nation of Rwanda some 19 years ago. From 4 April 1994, close to a million Tutsi ethnic minorities and some moderate Hutus were hacked to death in a killing spree that lasted for about 100 days. Hutu extremists were behind the brutal murders.

Jacqueline was only nine years old then. She survived because she was in another village visiting her grandmother. From there, she sought refuge in an Italian missionary. Her journey ended in the United States, where an uncle adopted her. Over the years, she has shared her story to educate people about crimes of genocide and mass atrocities. In her opinion, genocide is the greatest crime that a human being could commit against another. “I believe it is a grave injustice because you are being killed simply because of the way you were born. I did not choose to be a Tutsi.”

Survivors’ struggle
It is her fight against intolerance and indifference that led her to team up with Miracle Corners of the World (MCW), a youth empowerment organization, after her undergraduate studies. In 2007, she launched her own MCW Jacqueline’s Human Rights Corner, a genocide prevention programme. Murekatete uses the platform to educate people about genocide and to raise funds for Rwandan survivors. Rwandan authorities say there are about 300,000 to 400,000 survivors of genocide in the country, and 40,000 of them are without shelter.

Today Jacqueline is recognized internationally for her work as a youth leader and a humanitarian. She is the recipient of several awards, including the Global Peace and Tolerance Award from the United Nations. In a Rwandan-themed café in mid-town Manhattan, surrounded by her native art work and the familiar smell of the Arabica coffee bean, Jacqueline told Africa Renewal that she was one of the lucky ones. She was able to escape, get an education and a job.

“Nineteen years later, many [survivors] are still dealing with the consequences [of genocide]; a lot of them are still fighting to get their properties back,” she says. This is in addition to other physical ailments and mental trauma they are undergoing. Many are destitute, she adds. The most vulnerable are orphans, widows and rape victims. According to UNICEF, there are more than a million orphans in Rwanda, from a population of about 12 million.

Her organization built a youth community centre in Bugesera, a district in eastern Rwanda and home to two memorial sites. Just 40 kilometres away from the capital, Kigali, Bugesera is said to have lost half of its population to genocide. The community centre offers income-generating and educational programmes from learning English, to skills in plumbing, sewing and information technology.

Imperfect justice
With the closing in 2014 of the UN-backed International Criminal Tribunal for Rwanda set up following the genocide, Murekatete is already thinking ahead. She is working with the UK-based Survivors’ Fund to set up an international trust fund to help genocide victims. The fund will operate along the same lines with the one run by International Criminal Court in The Hague. So far the Rwandan tribunal, which is based in Arusha, Tanzania, has convicted and sentenced 65 people, with 17 pending appeals and 12 acquitted. Nine suspects are still at large.

Meanwhile, Rwanda’s community courts, known as “Gacaca”, completed their work last year. The courts were created to speed up the prosecution of perpetrators. During the hearings, accused persons would often confess to the killings in exchange for a reduced sentence or an amnesty. The courts have, however, failed to compensate survivors for their losses, laments Murekatete. “We realize that this is a critical time for us with the closing of the [Rwandan tribunal] and Gacaca trials,” she says, “We want to make sure that survivors will not be forgotten, people have to realize there is still a lot of work to do.”

‘Never again’
This year’s anniversary of the Rwanda genocide is on 7 April. For Murekatete, “this period of mourning is not just about Rwanda. We have to remember the genocide with the realization that it can happen anywhere.” She is alarmed by the mass atrocities that continue to be perpetrated around the world, as she puts it: “Darfur is still happening. Syria is happening. Congo is happening.” Despite this, she believes progress has been made, citing the dynamic and influential campaigns led by school kids and universities around the world against genocide in Darfur. She also cites the recent statement issued by the United States to declare genocide prevention “a core national security interest” and moral responsibility. “I think that was a very powerful statement to make because a lot of these things happened because countries didn’t feel it was in their national interest. I think that is progress.”

So as she takes part in the ceremonies and events to honour the victims of the 1994 genocide, her thoughts are with her late family, especially her month-old little brother. She no longer asks herself “why me?” but what she can do “to leave the world a better place.”