Maku: No Decision Yet On Amnesty for Boko Haram 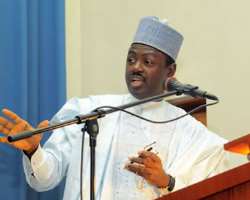 SAN FRANCISCO, April 10, (THEWILL) - Minister of Information, Mr. Labaran Maku, has stated that no decision had been taken yet on amnesty for Boko Haram as the Federal Government is still working on the proposal.

This came as the Minister of Women Affairs and Social Development, Hajiya Zainab Maina, called for the maximum penalty for convicted rapists in the country.

Maku stated this Wednesday while responding to a question while briefing State House correspondents on the outcome of the Federal Executive Council (FEC) meeting.

The Minister, who was flanked by his counterparts in the Education and Women Affairs and Social Development Ministries, Prof, Ruqayyatu Rufai’I and Hajiya Zainab Maina,respectively, however did not elaborate on the workings of the Amnesty Committee recently set up by the Federal Government, saying “You will be briefed as their work progresses.”

It will be recalled that President Goodluck Jonathan set up the amnesty committee last week after the National Security Council (NSC) meeting preceded by a parley with the Northern Elders Forum (NEF).

The Northern elders had been in the vanguard of the calls for amnesty for the insurgents who had been waging war against the Federal Government since 2009 when their leader, Muhammad Yusuf, was killed by the police after his capture following the outbreak of crises in Maiduguri, Borno State.

Much of what the amnesty committee, which is expected to be headed by the Sultan of Sokoto, Alhaji Sa’ad Abubakar, who was the first to call on the president to grant pardon to the militants, is up to is still shrouded in secrecy.

Aside the Sultan, others on the amnesty committee are the Chief of Defence Staff (CDS), Admiral Ibrahim Ola Sa’ad; the National Security Adviser (NSA), Col. Sambo Dasuki; representatives of the directors-General of the National Intelligence Agency (NIA), the State Security Service (SSS), the NEF and a former security chief of General Abdul-Salami Abubakar.

But a splinter group of Boko Haram has rejected the amnesty option, stating that it is not what they bargained for and it will not deter them from pursuing their course.

Speaking on the BBC Hausa service, Tuesday, spokesperson of the group, Abu Darda, said "We don't believe in the democratic form of government being practiced and in the constitution, but in Islamic law (Sharia)."

Describing the efforts of the Sultan and NEF as a waste of time, Darda said justice can only be found in the Holy Qur'an and the Sharia system of government.

Interestingly, leader of the Boko Haram and the Shura Council, comprising of 14 members, which is the highest decision-making organ of Boko Haram, Abubakar Shekau, has kept mum on the proposed pardon for his members.

Meanwhile, the minister of Women Affairs and Social Development, Hajiya Zainab Maina, has called for the maximum penalty for convicted rapists in the country.

Hajiya Maina, who made the call while briefing FEC on the performance of her ministry last year, expressed dissatisfaction that violence against women is on the increase and may have assumed a very worrisome position.

She said there are 7-10 cases of rape reported weekly, stressing “This has reached an alarming rate,” as she disclosed that this had necessitated the ministry to embark on sensitising and educating the police on the need to device means of properly prosecuting rapists.

“The ministry is working closely with the police and other security agencies. It is also trying to make the police set up a gender desk in every police station to handle such cases, so that serious punishment, perhaps death sentence for culprits,” she explained.

Maina had earlier briefed the FEC on the remarkable feat of the ministry towards attaining the 35 per cent affirmative action in the appointment of women into positions of authority in the country, on which she applauded the policy thrust of the president and the support of his wife.